Previous studies have shown that accumulation of advanced glycation end products (AGEs) can be the cause of diabetic nephropathy (DN) in diabetic patients. Dihydrochalcone 3′-O-β-d-glucopyranosyl α,4,2′,4′,6′-pentahydroxy–dihydrochalcone (1) is a powerful antiglycation compound previously isolated from Eysenhardtia polystachya. The aim was to investigate whether (1) was able to protect against diabetic nephropathy in streptozotocin (STZ)-induced diabetic mice, which displayed renal dysfunction markers such as body weight, creatinine, uric acid, serum urea, total urinary protein, and urea nitrogen in the blood (BUN). In addition, pathological changes were evaluated including glycated hemoglobin (HbA1c), advanced glycation end products (AGEs) in the kidney, as well as in circulation level and pro-inflammatory markers ICAM-1 levels in diabetic mice. After 5 weeks, these elevated markers of dihydrochalcone treatment (25, 50 and 100 mg/kg) were significantly (p < 0.05) attenuated. In addition, they ameliorate the indices of renal inflammation as indicated by ICAM-1 markers. The kidney and circulatory AGEs levels in diabetic mice were significantly (p < 0.05) attenuated by (1) treatment. Histological analysis of kidney tissues showed an important recovery in its structure compared with the diabetic group. It was found that the compound (1) attenuated the renal damage in diabetic mice by inhibiting AGEs formation. View Full-Text
Keywords: dihydrochalcone; advanced glycation end-product; Eysenhardtia polystachya; diabetic mice; renoprotective dihydrochalcone; advanced glycation end-product; Eysenhardtia polystachya; diabetic mice; renoprotective
►▼ Show Figures 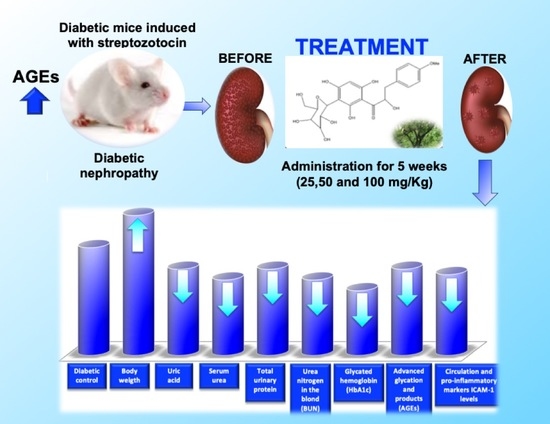