This paper reports the in silico prediction of biological activities of lignans from Diphylleia cymosa and Podophyllum hexandrum combined with an in vitro bioassays. The extracts from the leaves, roots and rhizomes of both species were evaluated for their antibacterial, anticholinesterasic, antioxidant and cytotoxic activities. A group of 27 lignans was selected for biological activities prediction using the Active-IT system with 1987 ligand-based bioactivity models. The in silico approach was properly validated and several ethnopharmacological uses and known biological activities were confirmed, whilst others should be investigated for new drugs with potential clinical use. The extracts from roots of D. cymosa and from rhizomes and roots of P. hexandrum were very effective against Bacillus cereus and Staphylococcus aureus, while podophyllotoxin inhibited the growth of Staphylococcus aureus and Escherichia coli. D. cymosa leaves and roots showed anticholinesterasic and antioxidant activities, respectively. The evaluated extracts showed to be moderately toxic to THP-1 cells. The chromatographic characterization indicated that podophyllotoxin was the major constituent of P. hexandrum extract while kaempferol and its hexoside were the main constituents of D. cymosa leaves and roots, respectively. These results suggest that the podophyllotoxin could be the major antibacterial lignan, while flavonoids could be responsible for the antioxidant activity. View Full-Text
Keywords: lignans; in silico studies; podophyllotoxin; antibacterial activity; acetylcholinesterase inhibitors; antioxidant activity; cytotoxicity lignans; in silico studies; podophyllotoxin; antibacterial activity; acetylcholinesterase inhibitors; antioxidant activity; cytotoxicity
►▼ Show Figures 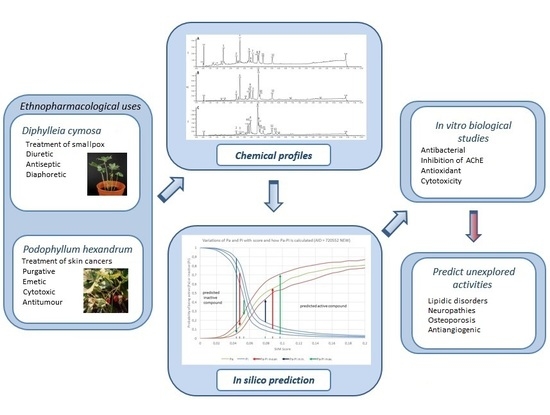