Bulnesia sarmientoi (BS) has long been used as an analgesic, wound-healing and anti-inflammatory medicinal plant. The aqueous extract of its bark has been demonstrated to have anti-cancer activity. This study investigated the anti-proliferative and anti-metastatic effects of BS supercritical fluid extract (BSE) on the A549 and H661 lung cancer cell lines. The cytotoxicity on cancer cells was assessed by an MTT assay. After 72 h treatment of A549 and H661 cells, the IC50 values were 18.1 and 24.7 μg/mL, respectively. The cytotoxicity on MRC-5 normal cells was relatively lower (IC50 = 61.1 μg/mL). BSE arrested lung cancer cells at the S and G2/M growth phase. Necrosis of A549 and H661 cells was detected by flow cytometry with Annexin V-FITC/PI double staining. Moreover, the cytotoxic effect of BSE on cancer cells was significantly reverted by Nec-1 pretreatment, and BSE induced TNF-α and RIP-1 expression in the absence of caspase-8 activity. These evidences further support that BSE exhibited necroptotic effects on lung cancer cells. By wound healing and Boyden chamber assays, the inhibitory effects of BSE on the migration and invasion of lung cancer cells were elucidated. Furthermore, the chemical composition of BSE was examined by gas chromatography-mass analysis where ten constituents of BSE were identified. α-Guaiene, (−)-guaiol and β-caryophyllene are responsible for most of the cytotoxic activity of BSE against these two cancer cell lines. Since BSE possesses significant cytotoxicity and anti-metastatic activity on A549 and H661 cells, it may serve as a potential target for the treatment of lung cancer. View Full-Text
Keywords: Bulnesia sarmientoi; supercritical fluid extraction; human lung cancer cells; necroptosis; migration and invasion; chemical ingredient analysis Bulnesia sarmientoi; supercritical fluid extraction; human lung cancer cells; necroptosis; migration and invasion; chemical ingredient analysis
►▼ Show Figures 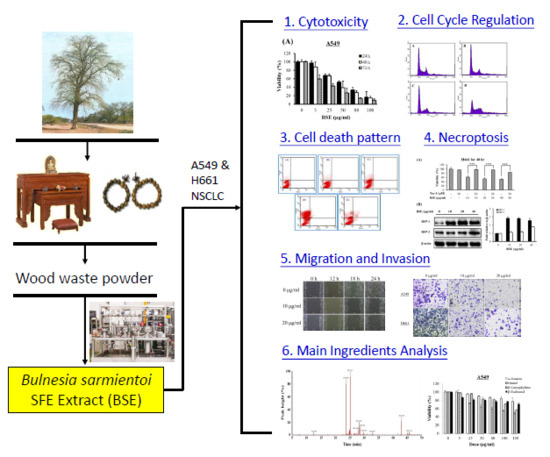