Fucoidans have been reported to exert anticancer effects with simultaneous low toxicity against healthy tissue. That correlation was observed in several cancer models, however, it has never been investigated in head and neck cancer before. To magnify the efficacy of conventional therapy, the administration of agents like fucoidan could be beneficial. The aim of this study was to evaluate the anticancer effect of Fucus vesiculosus (FV) extract alone and with co-administration of cisplatin in head and neck squamous cell carcinoma (HNSCC) in vitro. MTT assay results revealed an FV-induced inhibition of proliferation in all tested cell lines (H103, FaDu, KB). Flow cytometric cell cycle analysis showed an FV-induced, dose-dependent arrest in either S/G2 phase (H103, FaDu) or G1 arrest (KB). Furthermore, a dose-dependent gain in apoptotic fraction was observed. Western blot analysis confirmed the induction of apoptosis. A significant dose-dependent increase in reactive oxygen species (ROS) production was revealed in the H103 cell line, while FaDu cells remained unresponsive. On the contrary, an HPV-positive cell line, KB, demonstrated a dose-dependent decrease in ROS synthesis. Moreover, fucoidan enhanced the response to cisplatin (synergistic effect) in all cell lines with the HPV-positive one (KB) being the most sensitive. These results have been confirmed by flow-cytometric apoptosis analysis. In conclusion, we confirmed that fucoidan exhibits anticancer properties against HNSCC, which are manifested by the induction of apoptosis, regulation of ROS production, cell cycle arrest, and inhibition of proliferation. View Full-Text
Keywords: fucoidan; head and neck cancer; marine algae; complementary therapy; HNSCC fucoidan; head and neck cancer; marine algae; complementary therapy; HNSCC
►▼ Show Figures 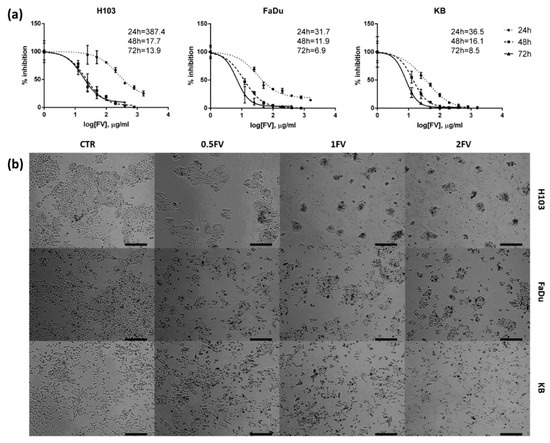