Submit to Robotics Review for Robotics

The year 2021 marks the 10th anniversary of Robotics, a peer-reviewed open access journal of robotics. Robotics has published more than 400 papers from more than 1300 authors. More than 850 reviewers have submitted at least one review report. We value the contributions of our authors and reviewers. To celebrate this 10th anniversary, we are arranging a series of special content and events. We hope you can join us to celebrate this milestone of our journal and enjoy the collection below.

Congratulations to Robotics 10th Anniversary from Editorial Board

View the 10-year timeline infographic here. Trace the development of Robotics from its origins with remarkable events.

The inaugural issue was released, with Robotics published as a quarterly journal

Professor Huosheng Hu, a Professor in the School of Computer Science & Electronic Engineering at the University of Essex, took over as Editor-in-Chief of Robotics. He was awarded a Ph.D. in Engineering Science in 1993 from the University of Oxford, UK. He has published over 450 papers in refereed journals, books, and conference pro-ceedings in the areas of autonomous mobile robots, mechatronics, embedded systems, bi-ologically inspired robotics, human–machine interaction, bio-signal processing, pervasive computing, distributed computer architectures, smart sensors, data fusion, learning algo-rithms (GA, NN, FL) in robotics, evolutionary robotics, and sensor networks, as well as networked devices, systems, and robots.

Indexed by Scopus from Vol. 6

Professor Marco Ceccarelli received his Ph.D. degree in 1987 at the University La Sa-pienza of Rome. He is a Professor at the University of Rome Tor Vergata. He is the Director of LARM2: Laboratory of Robot Mechatronics. He is the Scientific Editor of a Springer Book Series on the History of MMS and Mechanism and Machine Science, and an Associate Ed-itor of several Journals. He wrote the book Fundamentals of Mechanics of Robotic Manipulation in 2004. He is the co-author of a book on mechanism design in Spanish and A Brief Illus-trated History of Machines and Mechanisms, published in 2008 and 2010, respectively. He has received the Degree of Doctor Honoris Causa from international Universities and the ASME Historian Award. He is an ASME fellow. He was elected IFToMM President in 2008–2011 and 2016–2019. His research interests cover aspects of mechanism design, mechanics and design of robots, and the history of mechanical engineering.

Professor Giuseppe Carbone is an Associate Professor at DIMEG, University of Ca-labria and Chair of the IFToMM TC on Robotics and Mechatronics. He received a Master’s and a Ph.D. degree at the University of Cassino (Italy) where he has been a Key Member of LARM (Laboratory of Robotics and Mechatronics) for about 20 years. His research inter-ests cover aspects of engineering design, mechanics of robots, mechanics of manipulation and grasp, mechanics of machinery, with over 300 research paper outputs, 20 patents, and 16 Ph.D. completions.

Professor Roberto Sabatini is a Professor of Aerospace Engineering and Aviation in the School of Engineering (College of Science, Engineering and Health). He has 30 years of experience in aerospace, defense and transport systems design, testing and operations, acquired in progressively more responsible industrial and academic positions in Europe, the United States, and Australia. Professor Sabatini holds various academic qualifications, including a Ph.D. in Aerospace/Avionics Systems (Cranfield University), a Ph.D. in Geo-spatial Systems/Satellite Navigation (University of Nottingham), and an Advanced MEng in Astronautics/Space Engineering (La Sapienza University of Rome).

A new topical section was set up.

The application deadline for the Robotics 2021-2022 Travel Awards is 30 June 2022. This prize provides financial support for the winners to attend an international conference (physical or virtual) in the fields related to robotic systems, to be held in 2021 and 2022, where they will deliver a presentation, present a poster, or both.

Robotics 2021–2022 Best Video Abstract Award is open for applications. Authors are encouraged to provide a video abstract when submitting their manuscripts in order to improve the accessibility of papers. Deadline for video abstract submission: 31 December 2022. 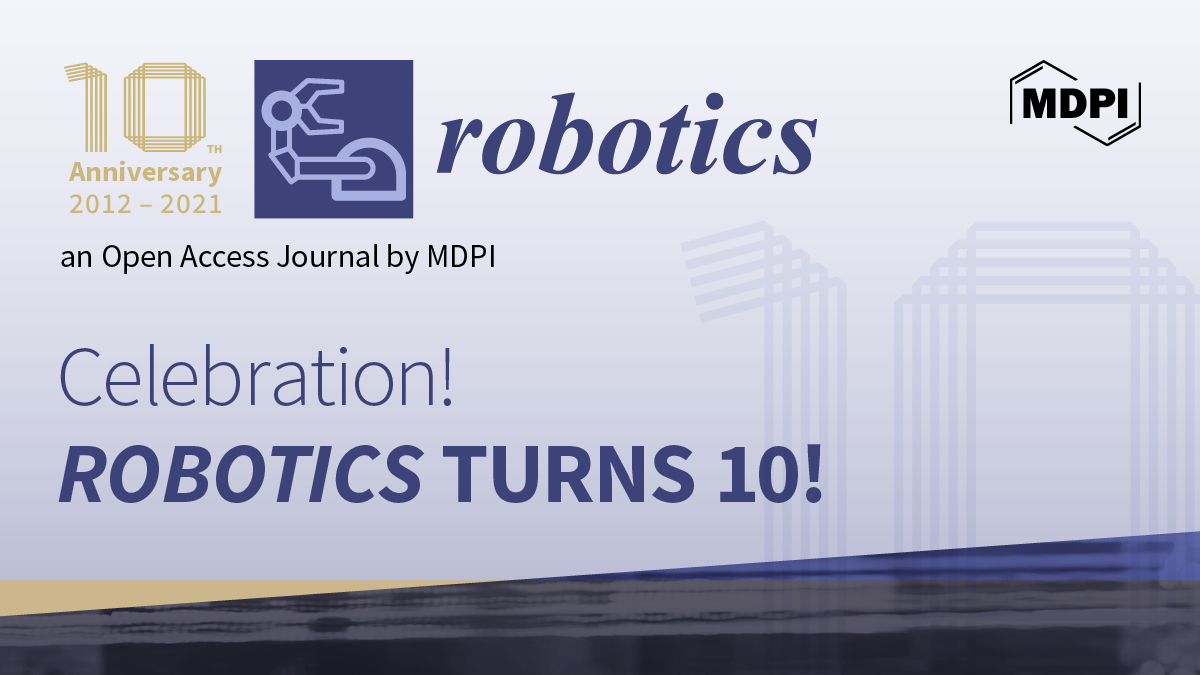 Access more outstanding works
We use cookies on our website to ensure you get the best experience. Read more about our cookies here.
Accept
We have just recently launched a new version of our website. Help us to further improve by taking part in this short 5 minute survey here. here.
Never show this again