Referral for Colonoscopy in Patients with Streptococcus bovis Bacteremia and the Association with Colorectal Cancer and Adenomatous Polyps: A Quality Assurance Study

The association between Streptococcus bovis (S. bovis) bacteremia and colorectal cancer is well established. We aimed to review patients with S. bovis bacteremia at our local hospital system and determine the percentage of patients referred for colonoscopy. Methods: We searched the regional database to identify S. bovis-positive blood cultures from 2002 to 2016 and the clinical characteristics and outcomes of those patients. Results: A total of 86 patients with S. bovis bacteremia were identified. From the 86 patients, 14 were excluded. The mean age of the 72 remaining patients was 74.5 (SD 13), 42/72 (58%) were male, 12/72 (17%) had infective endocarditis, and 19 (26%) died during admission. Of the 53 patients who survived, 37 (70%) were referred for colonoscopy or CT colonography, of which 30 had a colonoscopy. Thus, 3/30 (10%) cases showed adenocarcinoma and 11/30 (37%) cases showed adenomatous polyps. Age, gender, or the presence of infective endocarditis were not associated with adenocarcinoma or adenomatous polyps. Discussion: In our local centers, a significant proportion of patients with S. bovis were found to have colon cancer or significant polyps, and thus the importance of referral to colonoscopy remains paramount. View Full-Text
Keywords: Streptococcus bovis; colonoscopy; colonography; colon cancer Streptococcus bovis; colonoscopy; colonography; colon cancer
►▼ Show Figures 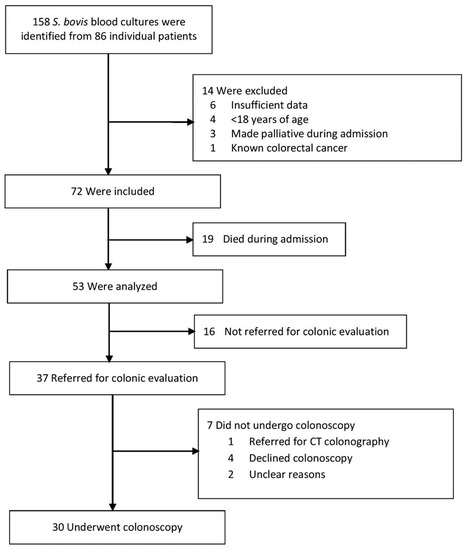