Submit to Sci Review for Sci 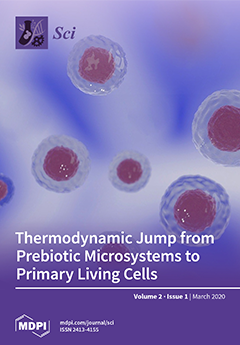 Cover Story (view full-size image): Life began with an enhanced response of prebiotic microsystems to stress. According to the author’s “inversion” concept, the original forms of life on the early Earth could not arise from organic matter simply as a result of the continuous chemical complication of prebiotic macromolecules and microsystems. This gradual chemical evolution had to be combined with continuous high-frequency oscillations of physicochemical parameters (temperature, pressure, etc.) in the parent hydrothermal environment. Oscillations initiated the emergence of induced extremely fast chemical reactions (“stress response”) within microsystems. It was the continuous network of induced reactions that “breathed life” into the lifeless organic matrix. This happened when the reaction of microsystems to external stress became intensified and purposeful. View this paper.
Previous Issue
Volume 1, December
Next Issue
Volume 2, June
We use cookies on our website to ensure you get the best experience. Read more about our cookies here.
Accept
We have just recently launched a new version of our website. Help us to further improve by taking part in this short 5 minute survey here. here.
Never show this again