The management of highly migratory species (HMS) is a complex domestic and international system that was initially established to regulate HMS taken in commercial fisheries in the Atlantic Ocean. For managing HMS taken in recreational fisheries, the authority and the data required is lacking and remains to be stipulated by regulating bodies. In the United States, Florida saltwater anglers target various HMS, but swordfish (Xiphias gladius) is a favorite among anglers. The recreational swordfish fishery off the Southeast Florida coast has experienced resurgence in recent years, with directed tournaments resuming in 2001 after being absent almost 20 years. Today, South Florida supports the largest group of recreational swordfish anglers in the world. Despite the increasing popularity and interest, little data is available describing the recreational swordfish fishery and its socio-economic aspects in South Florida. This study aimed to compile, describe, and identify the demographics, fishing tactics, costs, and fishery management perceptions of recreational swordfish anglers in South Florida based on nonprobability purposive sampling organized through the Southeast Swordfish Club (SESC). The sample size (n = 38) represented about 16–38% of the SESC members and between 6% and 8% of the recreational anglers that actively targeted swordfish in South Florida during the time of the survey. We acknowledge the sample size was small (n = 38), but believe the study encompassed the most active swordfish anglers given their knowledge, expertise, and connection with the fishery in terms of participants, fishing effort, and fishing techniques. As such, it is highly probable that a large portion of the recreational swordfish angling population was represented by members of the SESC in terms of swordfishing gear, techniques, and socio-economics, which reduced apparent bias in the study. Overall, the annual income of recreational swordfish anglers in 2007 ranged from US$15,000 to $200,000 with an average income of $91,940 (n = 33). Sixty-nine percent of polled anglers indicated they had more than 26 years of recreational fishing experience and 81% had less than 10 years of experience targeting swordfish in South Florida. Thirty-seven percent of surveyed anglers indicated they departed from Port Everglades, Florida. To target swordfish, anglers generally used five rods and set their bait, commonly squid, at 91 m. Anglers also indicated they changed their fishing tactics from day to night, and took about five fishing trips per month. Overall, anglers spent around $14,210 on annual costs associated with swordfishing, which was 16% of their annual income. Many polled anglers also reported they were dissatisfied with the current swordfish management regulations. View Full-Text
Keywords: swordfish; angling; fisheries management; fishing tournaments; hook-and-line; recreational fisheries swordfish; angling; fisheries management; fishing tournaments; hook-and-line; recreational fisheries
►▼ Show Figures 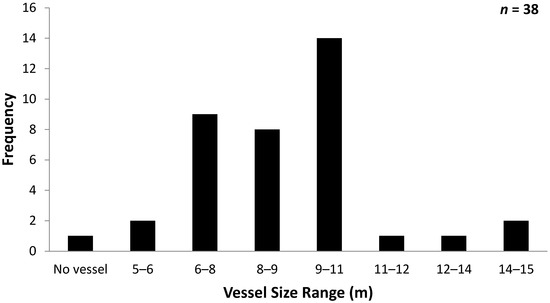