Enhanced Production and in situ Product Recovery of Fusicocca-2,10(14)-Diene from Yeast

Fusicocca-2,10(14)-diene (FCdiene) is a tricyclic diterpene which has many pharmaceutical applications, for example, it is a precursor for different anticancer drugs, including fusicoccin A. Chemical synthesis of this diterpene is not economical as it requires 14 steps with several stereospecific reactions. FCdiene is naturally produced at low titers in phytopathogenic filamentous fungi. However, production of FCdiene can be achieved via expression of fusicoccadiene synthase in yeast. The objective of this study is to increase FCdiene production by optimizing the yeast fermentation process. Our preliminary fermentations showed influences of carbon sources, buffer agents, and oxygen supply on FCdiene production. Buffer agents as well as oxygen supply were investigated in detail at 0.2 and 1.8 L cultivation volumes. Using glucose as the carbon source, FCdiene concentrations were increased to 240 mgFCdiene/L by optimizing pH and oxygen conditions. In situ extraction and adsorption techniques were examined at the 0.2 L scale to determine if these techniques could improve FCdiene yields. Different adsorbents and solvents were tested with in situ product recovery and 4-fold increases in FCdiene productivity could be shown. The results generated in this work provide a proof-of-concept for the fermentative production of FCdiene from S. cerevisiae as a practical alternative to chemical synthesis. View Full-Text
Keywords: fusicocca-2,10(14)-diene; pH; dissolved oxygen tension; lab-scale fermentation; in situ product recovery; production concept fusicocca-2,10(14)-diene; pH; dissolved oxygen tension; lab-scale fermentation; in situ product recovery; production concept
►▼ Show Figures 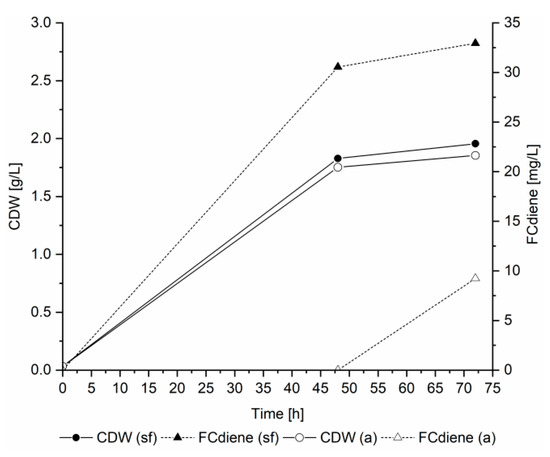