Insoluble fiber (IF) recovered from the enzyme-assisted aqueous extraction process (EAEP) of soybeans is a fraction rich in carbohydrates and proteins. It can be used to enhance ethanol production in an integrated corn-soy biorefinery, which combines EAEP with traditional corn-based ethanol processing. The present study evaluated IF as a substrate for ethanol production. The effects of treatment of IF (soaking in aqueous ammonia (SAA), liquid hot water (LHW), and enzymatic hydrolysis), primarily simultaneous saccharification and co-fermentation (SSCF), as well as scaling up (250 mL to 60 L) on ethanol production from IF alone or a corn and IF slurry were investigated. Enzymatic hydrolysis (pectinase, cellulase, and xylanase, each added at 5% soy solids during simultaneous saccharification and fermentation/SSCF) was the best treatment to maximize ethanol production from IF. Ethanol yield almost doubled when SSCF of IF was performed with Saccharomyces cerevisiae and Escherichia coli KO11. Addition of IF in dry-grind corn fermentation increased the ethanol production rate (~31%), but low ethanol tolerance of E. coli KO11 was a limiting factor for employing SSCF in combination corn and IF fermentation. Nonlinear Monod modeling accurately predicted the effect of ethanol concentration on E. coli KO11 growth kinetics by Hanes-Woolf linearization. Collectively, the results from this study suggest a potential of IF as a substrate, alone or in dry-grind corn fermentation, where it enhances the ethanol production rate. IF can be incorporated in the current bioethanol industry with no added capital investment, except enzymes. View Full-Text
Keywords: bioethanol; enzyme-assisted aqueous extraction of soybeans; soy fiber; dry-grind corn fermentation; Escherichia coli KO11 bioethanol; enzyme-assisted aqueous extraction of soybeans; soy fiber; dry-grind corn fermentation; Escherichia coli KO11
►▼ Show Figures 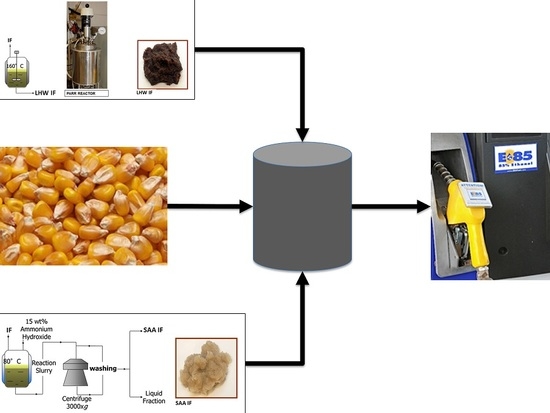