Fungi of the order Mucorales colonize all kinds of wet, organic materials and represent a permanent part of the human environment. They are economically important as fermenting agents of soybean products and producers of enzymes, but also as plant parasites and spoilage organisms. Several taxa cause life-threatening infections, predominantly in patients with impaired immunity. The order Mucorales has now been assigned to the phylum Mucoromycota and is comprised of 261 species in 55 genera. Of these accepted species, 38 have been reported to cause infections in humans, as a clinical entity known as mucormycosis. Due to molecular phylogenetic studies, the taxonomy of the order has changed widely during the last years. Characteristics such as homothallism, the shape of the suspensors, or the formation of sporangiola are shown to be not taxonomically relevant. Several genera including Absidia, Backusella, Circinella, Mucor, and Rhizomucor have been amended and their revisions are summarized in this review. Medically important species that have been affected by recent changes include Lichtheimia corymbifera, Mucor circinelloides, and Rhizopus microsporus. The species concept of Rhizopus arrhizus (syn. R. oryzae) is still a matter of debate. Currently, species identification of the Mucorales is best performed by sequencing of the internal transcribed spacer (ITS) region. Ecologically, the Mucorales represent a diverse group but for the majority of taxa, the ecological role and the geographic distribution remain unknown. Understanding the biology of these opportunistic fungal pathogens is a prerequisite for the prevention of infections, and, consequently, studies on the ecology of the Mucorales are urgently needed. View Full-Text
Keywords: Mucorales; taxonomy; pathogens, identification, ecology, Circinella, Lichtheimia, Mucor, Rhizomucor, Rhizopus Mucorales; taxonomy; pathogens, identification, ecology, Circinella, Lichtheimia, Mucor, Rhizomucor, Rhizopus
►▼ Show Figures 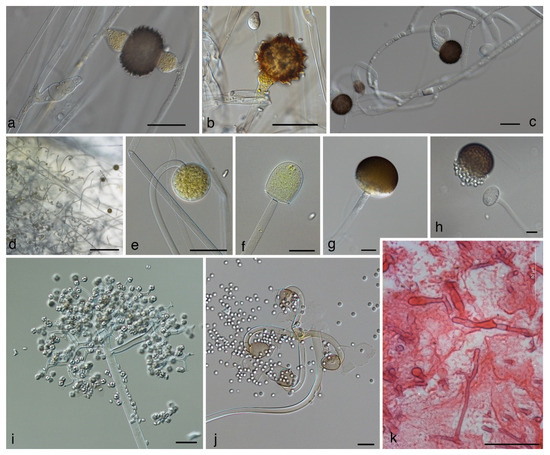 
Walther G, Wagner L, Kurzai O. Updates on the Taxonomy of Mucorales with an Emphasis on Clinically Important Taxa. Journal of Fungi. 2019; 5(4):106.