Candida albicans displays the ability to adapt to a wide variety of environmental conditions, triggering signaling pathways and transcriptional regulation. Sko1 is a transcription factor that was previously involved in early hypoxic response, cell wall remodeling, and stress response. In the present work, the role of sko1 mutant in in vivo and ex vivo studies was explored. The sko1 mutant behaved as its parental wild type strain regarding the ability to colonize murine intestinal tract, ex vivo adhesion to murine gut epithelium, or systemic virulence. These observations suggest that Sko1 is expendable during commensalism or pathogenesis. Nevertheless, the study of the hog1 sko1 double mutant showed unexpected phenotypes. Previous researches reported that the deletion of the HOG1 gene led to avirulent C. albicans mutant cell, which was, therefore, unable to establish as a commensal in a gastrointestinal murine model. Here, we show that the deletion of sko1 in a hog1 background reverted the virulence of the hog1 mutant in a systemic infection model in Galleria mellonella larvae and slightly improved the ability to colonize the murine gut in a commensalism animal model compared to the hog1 mutant. These results indicate that Sko1 acts as a repressor of virulence related genes, concluding that Sko1 plays a relevant role during commensalism and systemic infection. View Full-Text
Keywords: Candida albicans; virulence; stress response; transcription factor; commensalism Candida albicans; virulence; stress response; transcription factor; commensalism
►▼ Show Figures 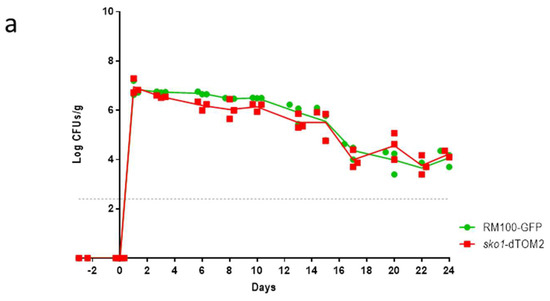