Lithium fluoride is an important material for ultraviolet optical systems, possessing among the largest optical bandgaps of dielectric materials. We report on the development of an atomic layer deposition (ALD) process for lithium fluoride that is capable of depositing thin films in a self-limiting manner, with an approximate deposition rate of approximately 0.15 Å per ALD cycle at a substrate temperature of 150 °C. Films are characterized by spectroscopic ellipsometry, atomic force microscopy, X-ray photoelectron spectroscopy, and far ultraviolet reflectometry. For substrate temperatures of 150 °C and greater, films showed significant microroughness with a correlated reduction in effective refractive index. This behavior was mitigated by a reduction in substrate temperature to as low as 100 °C. Films deposited on silicon substrates were subjected to long-term storage testing to evaluate the environmental sensitivity of the deposited layers. Protected aluminum mirrors were also fabricated with ALD LiF overcoats, yielding a reflectance of 84% at a wavelength of 125 nm. The performance relative to state-of-the-art LiF thin films deposited by physical vapor deposition methods is discussed, along with the prospects for future optimization. View Full-Text
Keywords: atomic layer deposition; lithium fluoride; ultraviolet; thin film; atomic layer etching; mirror atomic layer deposition; lithium fluoride; ultraviolet; thin film; atomic layer etching; mirror
►▼ Show Figures 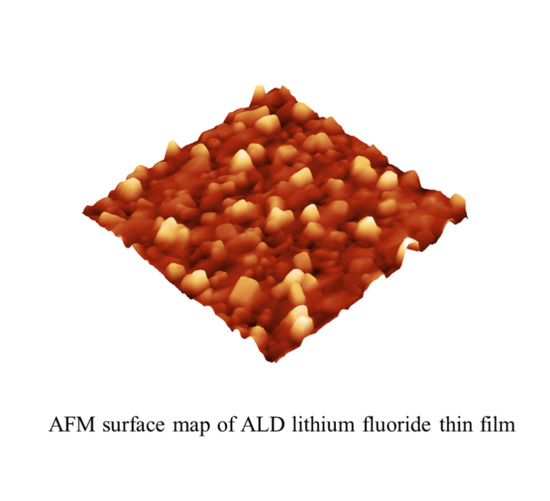