Highly nonlinear suspended-core fibers (SCFs) with tunable dispersion have attracted much attention in the fields of Raman amplification, optical frequency combs, broadband and flat supercontinuum generation (SCG). To address the limitation of applications due to its fragile suspension arms, this study proposes the design of a fiber structure with three parabolic air holes. Numerical simulations are performed to optimize an arsenic sulfide SCF in terms of dispersion management and SCG in the wavelength range from 0.6 µm to 11.6 µm. Results show that the proposed SCF has dual zero-dispersion wavelengths (ZDWs) that can be shifted by adjusting the parabolic coefficient of the air-hole and the equivalent diameter of the suspended core. By means of structural optimization, an SCF with 1 μm equivalent diameter and a parabolic coefficient of 0.18 μm−1 is proposed. The first ZDW of the SCF is blue-shifted to 1.541 μm, which makes it possible to use a commercial light source with a cheaper price, more mature technology and smaller volume as the pump source. SCG is studied by solving the generalized nonlinear Schrödinger equation using the split-step Fourier method, and a 0.6–5.0 μm supercontinuum spectrum is obtained at a pump source peak power of 40 kW. View Full-Text
Keywords: suspended-core fiber; parabolic air hole; characteristics analysis; nonlinear optics; supercontinuum suspended-core fiber; parabolic air hole; characteristics analysis; nonlinear optics; supercontinuum
►▼ Show Figures 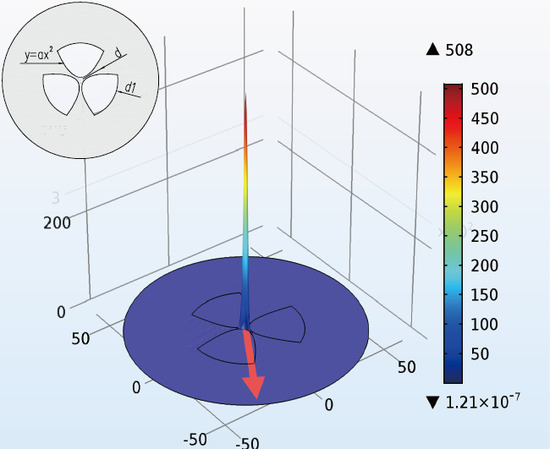