The difference of gas-solids flow between a circulating fluidized bed (CFB) downer and riser was compared by computational particle fluid dynamics (CPFD) approach. The comparison was conducted under the same operating conditions. Simulation results demonstrated that the downer showed much more uniform solids holdup and solids velocity distribution compared with the riser. The radial non-uniformity index of the solids holdup in the riser was over 10 times than that in the downer. In addition, small clusters tended to be present in the whole downer, large clusters tended to be present near the wall in riser. It was found that the different cluster behavior is important in determining the different flow behaviors of solids in the downer and riser. While the particle residence time increased evenly along the downward direction in the downer, particles with both shorter and longer residence time were predicted in the whole riser. The nearly vertical cumulative residence time distribution (RTD) curve in the downer further demonstrated that the solids back-mixing in the downer is limited while that in the riser is severe. Solids turbulence in the downer was much weaker compared with the riser, while the large clusters formation near the wall in the riser would hinder solids transportation ability. View Full-Text
Keywords: gas-solids flow; downer; riser; back-mixing; CPFD gas-solids flow; downer; riser; back-mixing; CPFD
►▼ Show Figures 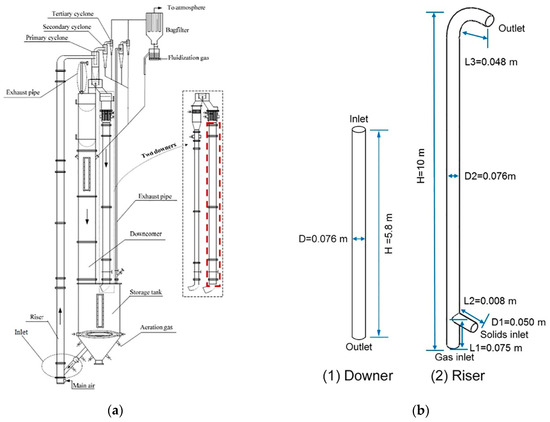