Revisiting the Use of the Proximity Lexicon in the Classroom for Immigrant Populations at Risk of Social Exclusion: Does It Really Help?

“My Child Is a Perfect Bilingual”: Cognition, Emotions, and Affectivity in Heritage Language Transmission

One of the key questions of studies on heritage language (HL) transmission is which factors most likely foster the intergenerational transmission of HL and more saliently favor its acquisition in second-generation speakers. The present study explores the effect of the cognitive and affective disposition of first-generation speakers on the subjective HL proficiency level in the second generation of Russian-speaking immigrants in the town of Salamanca, central Spain. Based on a scalar questionnaire which enquires into the language practices, language attitudes and language motivations of the first-generation speakers, the study analyzes the effect of self-categorization, attitudes towards HL utility, and strategies of HL intergenerational transmission in ten mixed families. The main results of the study show that positive HL affectivity is key to assuring proficient HL acquisition in second-generation speakers, while negative HL affectivity systematically drives unbalanced Spanish–Russian bilingualism in children. The final results are consistent with those of other recent studies on affectivity in HL and suggest the importance of positive attitudes towards HL in its transmission. View Full-Text
Keywords: heritage language; bilingualism; Russian language; Spanish language; cognition; self-categorization; assessment; affectivity; attitudes heritage language; bilingualism; Russian language; Spanish language; cognition; self-categorization; assessment; affectivity; attitudes
►▼ Show Figures 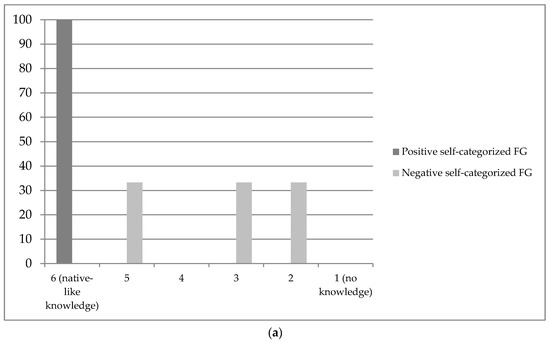 
Ivanova, Olga. 2019. "“My Child Is a Perfect Bilingual”: Cognition, Emotions, and Affectivity in Heritage Language Transmission." Languages 4, no. 2: 44.