Joint Modeling of Severe Dust Storm Events in Arid and Hyper Arid Regions Based on Copula Theory: A Case Study in the Yazd Province, Iran
Previous Article in Special Issue

Land Use Change and Its Impacts on Land Surface Temperature in Galle City, Sri Lanka

This study investigated the spatiotemporal changes of land use land cover (LULC) and its impact on land surface temperature (LST) in the Galle Municipal Council area (GMCA), Sri Lanka. The same was achieved by employing the multi-temporal satellite data and geo-spatial techniques between 1996 and 2019. The post-classification change detection technique was employed to determine the temporal changes of LULC, and its results were utilized to assess the LST variation over the LULC changes. The results revealed that the area had undergone a drastic LULC transformation. It experienced 38% increase in the built-up area, while vegetation and non-built-up area declined by 26% and 12%, respectively. Rapid urban growth has had a significant effect on the LST, and the built-up area had the highest mean LST of 22.7 °C, 23.2 °C, and 26.3 °C for 1996, 2009, and 2019, correspondingly. The mean LST of the GMCA was 19.2 °C in 1996, 20.1 °C in 2009, and 22.4 °C in 2019. The land area with a temperature above 24 °C increased by 9% and 12% in 2009 and 2019, respectively. The highest LST variation (5.5 °C) was observed from newly added built-up area, which was also transferred from vegetation land. Meanwhile, the lowest mean LST difference was observed from newly added vegetation land. The results show that the mean annual LST increased by 3.2 °C in the last 22 years in GMCA. This study identified significant challenges for urban planners and respective administrative bodies to mitigate and control the negative effect of LST for the long livability of Galle City. View Full-Text
Keywords: landscape pattern; land surface temperature; sustainable urban planning; impervious surface; Galle City landscape pattern; land surface temperature; sustainable urban planning; impervious surface; Galle City
►▼ Show Figures 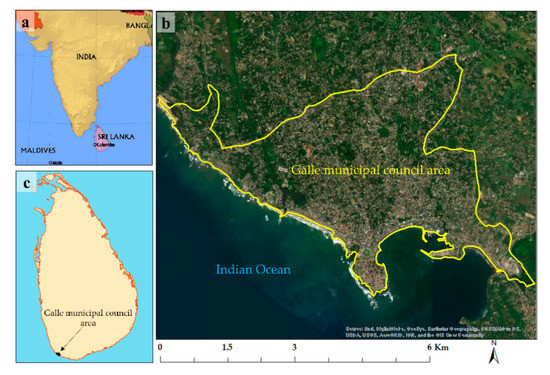