In this paper we propose a probabilistic sequential model of Human-Robot Spatial Interaction (HRSI) using a well-established Qualitative Trajectory Calculus (QTC) to encode HRSI between a human and a mobile robot in a meaningful, tractable, and systematic manner. Our key contribution is to utilise QTC as a state descriptor and model HRSI as a probabilistic sequence of such states. Apart from the sole direction of movements of human and robot modelled by QTC, attributes of HRSI like proxemics and velocity profiles play vital roles for the modelling and generation of HRSI behaviour. In this paper, we particularly present how the concept of proxemics can be embedded in QTC to facilitate richer models. To facilitate reasoning on HRSI with qualitative representations, we show how we can combine the representational power of QTC with the concept of proxemics in a concise framework, enriching our probabilistic representation by implicitly modelling distances. We show the appropriateness of our sequential model of QTC by encoding different HRSI behaviours observed in two spatial interaction experiments. We classify these encounters, creating a comparative measurement, showing the representational capabilities of the model. View Full-Text
Keywords: qualitative trajectory calculus; human-robot spatial interaction; qualitative spatial relations; probabilistic sequential models; proxemics qualitative trajectory calculus; human-robot spatial interaction; qualitative spatial relations; probabilistic sequential models; proxemics
►▼ Show Figures 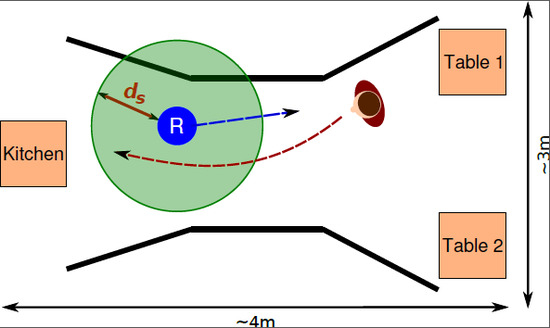