HIV-Infected Patients: Cross Site-Specific Hydrolysis of H2a and H2b Histones and Myelin Basic Protein with Antibodies against These Three Proteins
Next Article in Special Issue

Cellular Dynamics of Transition Metal Exchange on Proteins: A Challenge but a Bonanza for Coordination Chemistry
Previous Article in Journal

Periodontitis is a group of microbial-induced diseases characterized by gingival inflammation and host-mediated destruction of the tooth supporting tissues. The pathophysiology of the disease involves the activation of immune–inflammatory responses that trigger periodontal attachment loss and marginal alveolar bone destruction that can end up, in severe cases, in tooth mobility and final tooth loss, as well as higher risk of non-communicable diseases [1,2]. Periodontitis constitutes a global health problem that affects millions of people around the globe and requires, due to its chronic nature, continuous and lifelong monitoring and care [3].
Despite the current knowledge of periodontal diseases’ etiology and therapy [4,5], current diagnostic tools are mainly restricted to clinical and radiographic findings that represent past events of the disease (bleeding on probing, probing depth, clinical attachment loss, and radiographic bone loss) [6], and do not always exert the ability to detect the disease in its most incipient forms. Lately, periodontal research has focused on finding effective diagnostic molecular biomarkers to assist clinicians in the risk-assessment and decision-making process, as the adjustment of the therapy to the patients’ individual needs. Moreover, the new classification of periodontal diseases opened up to the future incorporation of biomarkers to aid in the case definition and classification of periodontal diseases by severity and complexity (“stage”) and risk of progression (“grade”), especially in the early detection of initial forms of the disease [7].
Gingival crevicular fluid (GFC) is a non-invasive and easily obtainable serum exudate in periodontal inflammation, which is able to carry the site-specific biologic biomarkers from the surrounding microcirculation. Evidence shows that GCF molecular constituents include markers of destruction or inflammation that may help to discriminate between healthy and diseased periodontitis sites, progression sites, or even periodontitis severity levels [8,9,10,11]. Higher degrees of sensitivity have been reached by combining different sets of GFC biomarkers; however, until now, there is no single or multiple validated biomarker for periodontal disease detection, assessment or classification [12,13].
The regulation of the delicate bone balance involves the interplay of soluble mediators including receptor activator of nuclear factor kappa-Β ligand (RANK-L), its physiologic inhibitor osteoprotegerin (OPG), and tartrate-resistant acid phosphatase-5 (TRAP-5). RANK-L is an osteolytic cytokine that binds to RANK (receptor activator of nuclear factor kappa-Β) on the mononuclear precursors. Once differentiated, activated osteoclasts express and secrete TRAP-5, accounting for bone resorptive activity. OPG is a decoy receptor that prevents RANK-L binding to RANK exerting an osteoprotective effect [14]. The neutrophil collagenase MMP-8, has been particularly studied and involved in periodontal tissue destruction, due to its particular property to degrade type-I collagen, the main constituent of periodontal extracellular matrix [10,15].
MMP-8 levels in GCF have demonstrated a high potential to identify individuals with periodontitis and reflect its severity [8,16,17], while OPG levels have been associated with the quantity and severity of periodontal bone destruction [18]. Despite its potential to reflect osteoclastic activity, TRAP-5 has been addressed in periodontitis just by few studies, supporting its potential to identify periodontitis forms in GCF and tissue samples [9,19]. In spite of the previous studies, more evidence is needed to determine the potential of these biomarkers in periodontitis, particularly in the timely detection of incipient forms and sites of disease, and their potential usefulness, hereafter, in the new classification of periodontal diseases.
The aim of this study was to assess whether MMP-8, TRAP-5, and OPG levels in GCF have diagnostic potential to discriminate between healthy patients’ mild and severe periodontitis sites. We propose that these biomarkers have a high diagnostic performance to differentiate between incipient and more advanced levels of the disease.

In this cross-sectional clinical study, periodontitis individuals (n = 18) and healthy volunteers (n = 13) from Centers of Diagnostics and Treatment of Northern Metropolitan Health Services, Santiago, Chile, were included. Inclusion criteria for periodontitis subjects encompassed a minimum of 14 natural teeth, at least three molars (excluding 3rd molars), five or more sites with periodontal probing depth (PPD) ≥ 5 mm [20], clinical attachment loss (CAL) ≥ 3 mm, and radiographic bone loss [21]. The healthy group consisted of volunteers that exhibited PPD ≤ 3 mm in every site and bleeding on probing (BOP) < 10% [22]. Exclusion criteria for all subjects were previous periodontal treatment; history of systemic disorders, such as diabetes mellitus, osteoporosis, pregnancy or nursing; or intake of medications that could affect periodontal tissues, within the past three months prior to the study. The study protocol was approved by the Ethics Committee of the Faculty of Dentistry, University of Chile, and endorsed by the FONDECYT (National Fund for Scientific and Technological Development) Bioethics Advisory Committee (FONDECYT 1090046, 28 April 2009). Procedures were undertaken with the understanding and written consent of each subject and according to ethical principles, including the World Medical Association Declaration of Helsinki.
Based on the previously-reported levels of MMP-8 [9], a minimum of 14 individuals per group was calculated to identify the differences between healthy and periodontitis groups with alpha = 0.05 and 95% power.
The subjects’ background was recorded in a medical chart that included demographic variables, current smoking, and the assessment of periodontal clinical parameters. Periodontal probing depth (PPD), clinical attachment loss (CAL), and bleeding on probing (BOP) were examined through all tooth perimeters by three calibrated examiners (JC, MB, and PH) who registered six sites in each tooth (mesiobuccal, buccal, distobuccal, distolingual, lingual, and mesiolingual) using a North Carolina manual probe (UNC-15, Hu-Friedy, Chicago, IL, USA). Sites from periodontitis patients were classified as follows: (1) initial to moderate periodontitis sites (mild sites), with CAL and PPD corresponding to those described in periodontitis stages I and II (CAL ≤ 4 mm and PPD ≤ 5 mm); and (2) severe to advanced sites (severe sites), with CAL and PPD corresponding to those described in periodontitis stages III and IV (CAL ≥ 5 mm) [7]. Healthy sites from healthy subjects (healthy sites) (PD ≤ 3 mm without BOP) [22], were also obtained. Fourteen healthy and 18 periodontitis volunteers were finally included. One individual was withdrawn from the healthy group.

GCF samples from healthy sites from healthy individuals (H), as well as mild (M) and severe (S) periodontitis sites from diseased individuals, were consecutively collected with paper strips (Periopaper®, ProFlow, Amityville, NY, USA), placed into the pocket until mild resistance was sensed, and left in place for 30 s as previously reported [23]. Strips contaminated with blood or saliva were discarded. Two to six GCF samples were collected per patient. One hundred thirty two sites from 31 volunteers were sampled and frozen for the posterior immunobiochemical analyses.
GCF was eluted from the strips in a constant ratio of 80 μL of buffer containing 50 mM TrisHCl pH 7.5, 0.2 M NaCl, 5 mM CaCl2, and 0.01% Triton X-100 (Sigma-Aldrich, St. Louis, MO, USA), as previously reported [21].
MMP-8 levels were determined by the time-resolved immunofluorometric (IFMA) method (Hanemaaijer et al., 1997); and TRAP5 and OPG levels though a commercial Multiplex detection panel (Millipore, St. Charles, MO, USA.), according to the manufacturer’s instructions. Data were collected through a Luminex platform (Magpix, Millipore, St. Charles, MO, USA), and analyzed with the MILLIPLEX AnalystR software (ViageneTech, Carlisle, MA, USA). Results were expressed as ng/mL elution.

Results were expressed at the site level as means ± standard deviation for the quantitative variables, while frequencies and proportions (%) were used for categorical variables. Group proportions were compared by Fisher’s exact test, while mean values were compared with a one-way ANOVA and Bonferroni post-hoc test. Crude and multiple linear regression models to assess the potential of biomarkers to identify healthy sites (healthy versus mild and severe periodontitis sites) and severe periodontitis sites (healthy plus mild versus severe periodontitis sites) were performed. Multiple linear models were adjusted by simultaneously entering age, gender, and smoking as covariates.
The evaluation of the diagnostic precision of the biomarkers was carried out using simple logistic regression models, with the biomarkers as explanatory variables of the clinical picture. After specifying the model, the Receiver Operating Characteristic (ROC) curves were estimated, simultaneously contrasting the sensitivity and (1- specificity) through the area under the curve (AUC) to determine the diagnostic potential of the biomarkers to identify healthy sites (healthy from mild to severe periodontitis sites), as well as their diagnostic potential to identify severe periodontitis sites (healthy plus mild from severe periodontitis sites). Additionally, this was complemented with the estimation of the Youden index, which allows establishing the optimal cut-off to achieve the highest sensitivity and specificity simultaneously and with this, the predictive capacity of the biomarker. Also, logistic regression models adjusted for age, sex, and smoking.
Statistical analyses were performed blindly, on all available data. Those observations that were under the limit of detection were imputed with the minimum value. Results were considered to be significant at the 5% critical level (p < 0.05). All calculations were performed using Stata V 12 package for Windows.

MMP-8, TRAP-5, and OPG present a high precision diagnostic potential in the identification of periodontal disease destruction. While TRAP-5 and OPG perform well in discriminating severe sites, MMP-8 is the most accurate biomarker to identify different levels of periodontal health and disease.

The authors are grateful to Dalila Valenzuela and the personnel of the Laboratory of Periodontal Biology (Faculty of Dentistry, University of Chile), for their valuable technical assistance. 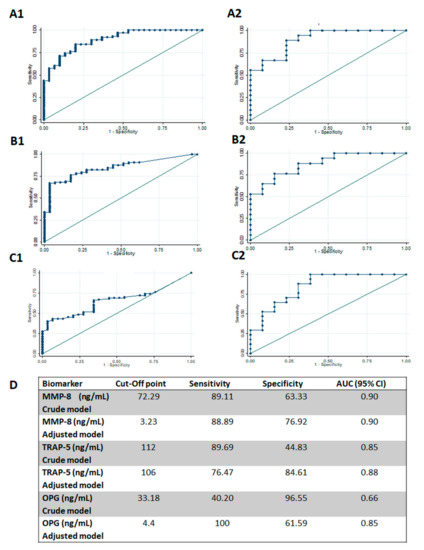 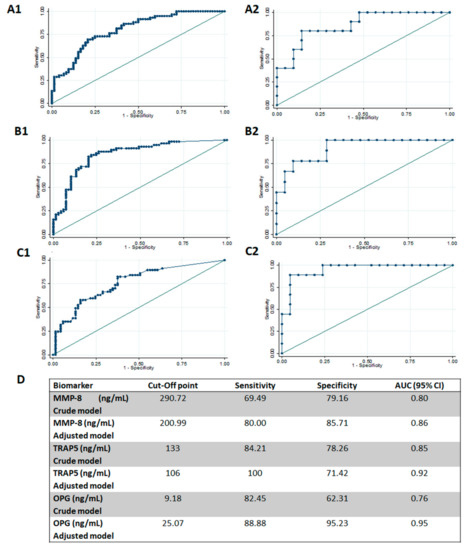 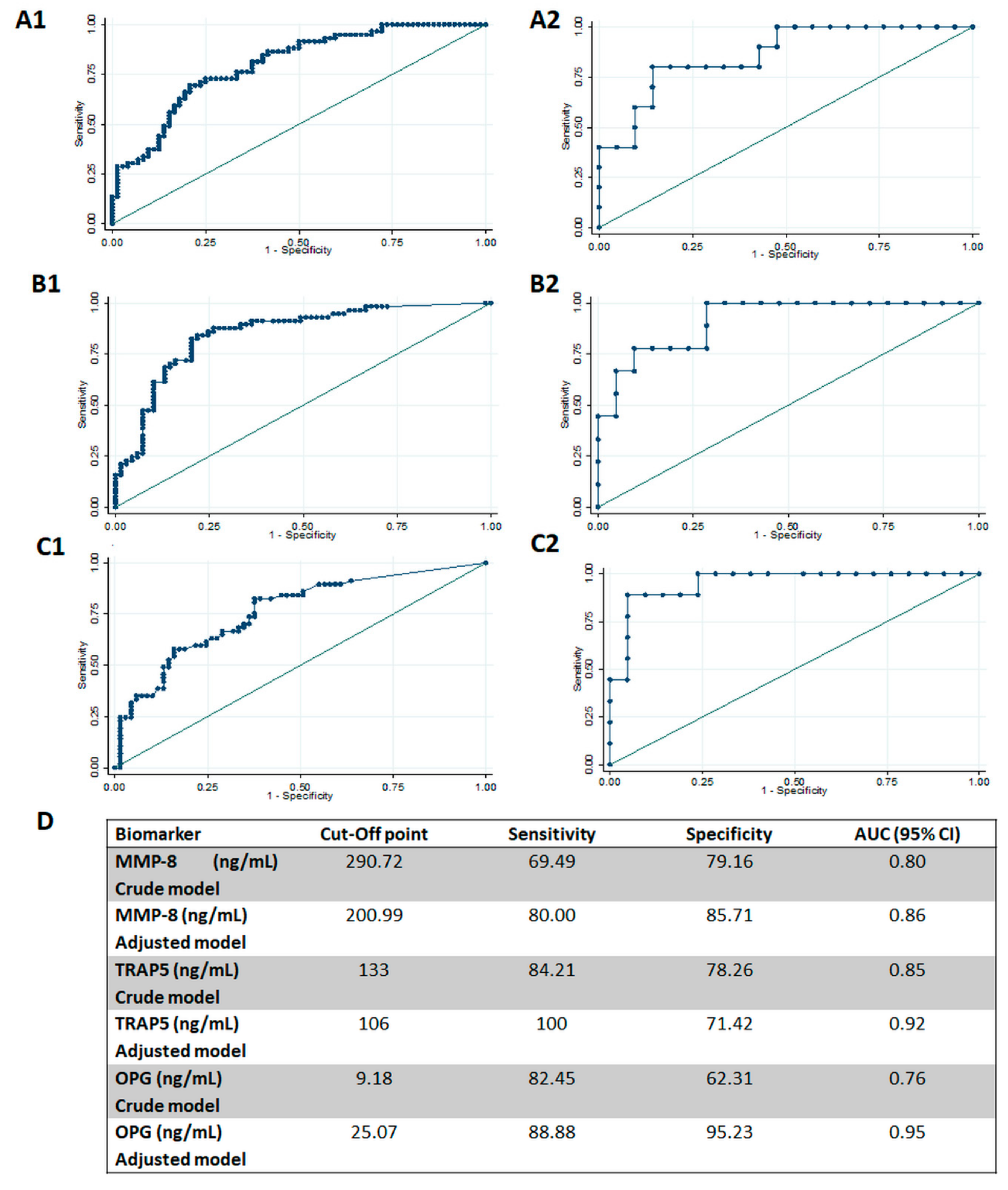