Multiple Biological Effects of an Iridoid Glucoside, Catalpol, and Its Underlying Molecular Mechanisms

Catalpol, an iridoid glucoside, is widely distributed in many plant families and is primarily obtained from the root of Rehmannia glutinosa Libosch. Rehmannia glutinosa is a plant very commonly used in Chinese and Korean traditional medicine for various disorders, including diabetes mellitus, neuronal disorders, and inflammation. Catalpol has been studied extensively for its biological properties both in vitro and in vivo. This review aims to appraise the biological effects of catalpol and their underlying mechanisms. An extensive literature search was conducted using the keyword “Catalpol” in the public domains of Google scholar, PubMed, and Scifinder. Catalpol exhibits anti-diabetic, cardiovascular protective, neuroprotective, anticancer, hepatoprotective, anti-inflammatory, and anti-oxidant effects in experimental studies. Anti-inflammatory and antioxidant properties are mostly related for its biological effect. However, some specific mechanisms are also elucidated. Elevated serotonin and BDNF level by catalpol significantly protect against depression and neurodegeneration. Catalpol demonstrated an increased mitochondrial biogenesis and activation of PI3K/Akt pathway for insulin sensitizing effect. Further, its cardiovascular protective effect was linked to PI3K/Akt, apelin/APJ and Jak-Stat pathway. Catalpol produced a significant reduction in cell proliferation and an increase in apoptosis in different cancer conditions. Overall, catalpol demonstrated multiple biological effects due to its numerous mechanisms including anti-inflammatory and antioxidant effects. View Full-Text
Keywords: catalpol; antidiabetic; anticancer; neuroprotection; antioxidant; anti-inflammation; cardiovascular protection catalpol; antidiabetic; anticancer; neuroprotection; antioxidant; anti-inflammation; cardiovascular protection
►▼ Show Figures 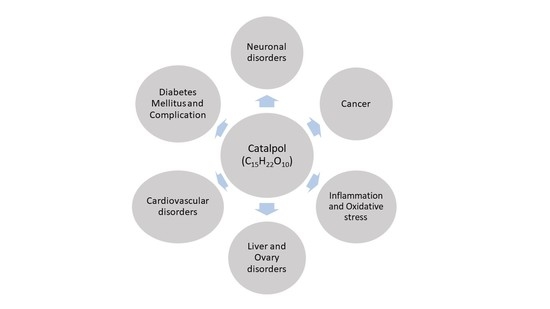