Metal–insulator–semiconductor (MIS) structures based on thin GeO[SiO2] and GeO[SiO] films on Si substrates were fabricated with indium-tin-oxide as a top electrode. The samples were divided it two series: one was left as deposited, while the second portion of MIS structures was annealed at 500 °C in argon for 20 min. The structural properties of as-deposited and annealed non-stoichiometric germanosilicate (GeSixOy) films were studied using X-ray photoelectron spectroscopy, electron microscopy, Raman and infrared absorption spectroscopy, spectral ellipsometry, and transmittance and reflectance spectroscopy. It was found that the as-deposited GeO[SiO] film contained amorphous Ge clusters. Annealing led to the formation of amorphous Ge nanoclusters in the GeO[SiO2] film and an increase of amorphous Ge volume in the GeO[SiO] film. Switching from a high resistance state (HRS OFF) to a low resistance state (LRS ON) and vice versa was detected in the as-deposited and annealed MIS structures. The endurance studies showed that slight degradation of the memory window occurred, mainly caused by the decrease of the ON state current. Notably, intermediate resistance states were observed in almost all MIS structures, in addition to the HRS and LRS states. This property can be used for the simulation of neuromorphic devices and related applications in data science. View Full-Text
Keywords: germanosilicate glass; memristor; Ge nanoclusters; resistance states; thin films germanosilicate glass; memristor; Ge nanoclusters; resistance states; thin films
►▼ Show Figures 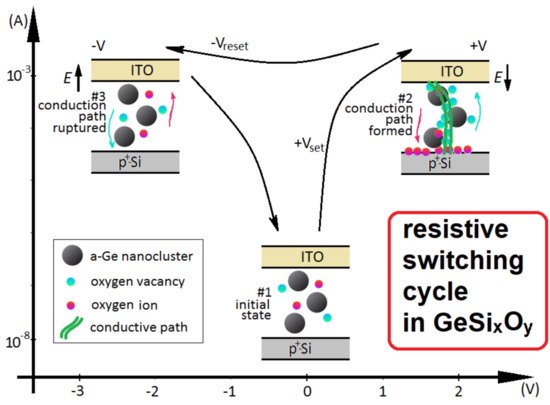