It remains important to investigate skin ageing signs across different skin types for targeted solutions. Limited data is available on Indian skin changes throughout ageing, hence three fields were investigated: skin features during the ageing process, their relationship with perceived age and self-declared skin ageing concerns. Photographs, skin topography, colour and biophysical measurements of 202 Indian female volunteers, 30–65 years old, were collected. Another panel of 693 naïve graders, 20–65 years old, estimated the age of photographs previously collected. Associations between 28 skin features and real/perceived age were assessed using linear correlation coefficients. Skin feature scores of an older perceived group were compared versus the scores of a younger perceived group, to establish skin features that lead to an older appearance. Additionally, the naïve graders were asked to rank 12 skin ageing concerns by importance. Twenty-four features correlated with real and perceived age. The ages of the volunteers were overestimated, especially those in their 30s. Skin features related to skin brightness suggested an older look for volunteers in their 30s. From the 40s onwards, wrinkles around the eye area, glabellar and corner of the mouth were also drivers for looking older. In the 50s, features such as upper lip wrinkles, hydration and roughness on the crow’s feet were worse in the older perceived group, while nasolabial folds suggested an older appearance in the 60s. By having identified skin features that worsen with age and contribute to an older perceived face, this research will facilitate the creation of tailored products and communication for Indian women to look after their skin concerns throughout the ageing process. View Full-Text
Keywords: skin ageing; perceived age; wrinkles; skin brightness; India skin ageing; perceived age; wrinkles; skin brightness; India
►▼ Show Figures 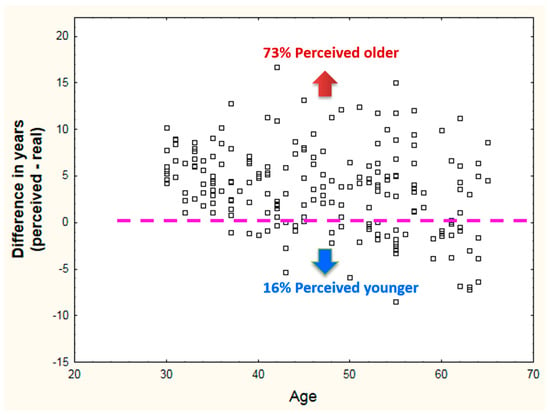