Optical and mechanical properties of multilayer coatings depend on the selected layer materials and the deposition technology; therefore, knowledge of the performances of thin films is essential. In the present work, titanium dioxide (TiO2) and silicon dioxide (SiO2) thin films have been prepared by plasma ion-assisted deposition (PIAD). The optical, structural, and mechanical properties of thin films have been investigated using spectrometer/ellipsometer, X-ray diffraction (XRD), atomic force microscopy (AFM), and laser interferometer. The results show that TiO2 film fabricated by PIAD induces a high refractive index, wide optical band gap, amorphous structure, smooth surface, and tensile stress. In the case of SiO2 film, high bias voltage leads to dense structure and compressive stress. As an application, a three-wavelength high reflectance at 632.8, 808, and 1550 nm was optimized and deposited. The dependence of total stress in the multilayer on the substrate temperature was studied as well. In conclusion, it was demonstrated that PIAD is an effective method for the preparation of ultralow stress TiO2/SiO2 multilayer films. The achieved stress was as low as 1.4 MPa. The result could provide guidance to the stress optimization of most optical components without prefiguring, backside coating, and postdeposition treatments. View Full-Text
Keywords: stress; plasma ion-assisted deposition; TiO2 film; SiO2 film; annealing treatment stress; plasma ion-assisted deposition; TiO2 film; SiO2 film; annealing treatment
►▼ Show Figures 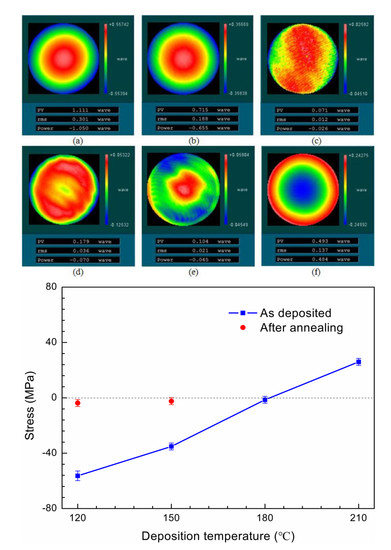