Enhanced Electrochromic Properties by Improvement of Crystallinity for Sputtered WO3 Film

Tungsten oxide (WO3) is widely used as a functional material for “smart windows” due to its excellent electrochromic properties, however it is difficult to overcome the conflict between its optical modulation and cyclic stability. In this work, WO3 thin films with different crystal structures were prepared by DC reactive magnetron sputtering method. The effects of substrate temperature on the structure, composition, and electrochromic properties of WO3 films were investigated. The results show that the crystallinity of the WO3 film increases with increasing deposition temperature, indicating that temperature plays an important role in controlling the structure of the WO3 film. For WO3 thin films formed at a substrate temperature of 573 K, the film is in an amorphous state to a crystalline transition state. From X-ray diffraction (XRD) analysis, the thin film showed a weak WO3 crystallization peak, which was in the composite structure of amorphous and nanocrystalline. Which has the best electrochromic properties, with modulation amplitude of 73.1% and bleached state with a coloration efficiency of 42.9 cm2/C at a wavelength of 550 nm. Even after 1500 cycles, the optical modulation still contains 65.4%, delivering the best cyclic stability. View Full-Text
Keywords: DC reactive magnetron sputtering; WO3 thin film; crystallinity; electrochromic; substrate temperature DC reactive magnetron sputtering; WO3 thin film; crystallinity; electrochromic; substrate temperature
►▼ Show Figures 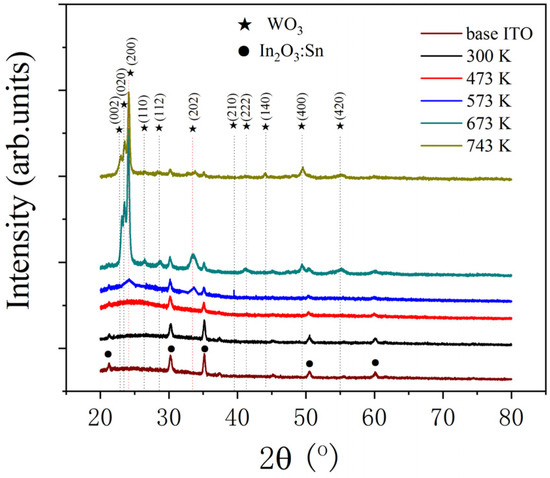