Meat Consumers’ Opinion Regarding Unhealthy Pigs: Should They Be Treated with Antibiotics or Euthanized on Farm?

The aim of this study was to investigate the opinions of meat consumers (n = 1780) on on-farm management of unhealthy pigs, whether support for treatment with antibiotics varies according with chance of recovery, and the effect of knowledge on the use of antibiotics on these opinions. Most participants believed that the use of antibiotics was the best solution for unhealthy pigs, and this was associated with a low level of knowledge about antibiotics. Increasing the probability of recovery after treatment increased support for treating pigs with antibiotics. However, the majority of participants rejected the consumption of meat from animals housed in “hospital pens”. After price, concern with food safety was the second main factor that influenced participants’ choice when buying meat. Support for the use of antibiotics to deal with unhealthy pigs in “hospital pens”, as well as for consumption of the meat from these animals, was higher among participants involved in agriculture. This shows that consumers are unaware of the potential negative repercussions for animal welfare associated with banning or reducing the use of antibiotics in livestock production, which is an important concern for the industry. View Full-Text
Keywords: consumer; perception; antibiotic; opinion; pig; welfare; euthanasia consumer; perception; antibiotic; opinion; pig; welfare; euthanasia
►▼ Show Figures 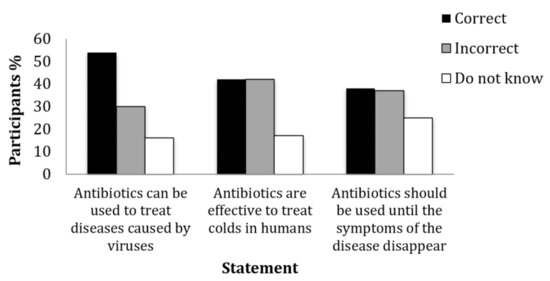