Meat Consumers’ Opinion Regarding Unhealthy Pigs: Should They Be Treated with Antibiotics or Euthanized on Farm?
Previous Article in Journal

Evaluation of Antibiotic Use in Kazakhstan for the Period 2017–2019 Based on WHO Access, Watch and Reserve Classification (AWaRe 2019)
Previous Article in Special Issue

Clostridium perfringens is a serious threat to successful bovine farming. It causes severe damage to the buffalo and cattle health causing a drastic reduction in milk and meat production. In Pakistan, C. perfringens is a constant threat, and for its management, antibiotics are mostly used. Most bovine farmers use a single antibiotic to suppress the bacterial infection which in turn, increases the antimicrobial resistance (AMR) against the particular antibiotic. To reduce the resistance, the administration of multiple antibiotics in their standard doses at different times can be a possible remedy to manage the AMR and reduce their viability. This study aims to evaluate the effect of 11 commonly used antibiotics at their standard concentrations for inhibiting 33 strains of C. perfringens from five districts of Punjab province in Pakistan. Based on the zone of inhibition, ciprofloxacin, ampicillin, and cefotaxime (CAC) at their standard concentrations effectively inhibited the bacterium. These antibiotics showed appropriate significance statistically, i.e., correlation, Chi-square test, and cluster analysis. Optimization of these antibiotics using response surface methodology (RSM) revealed that the selected antibiotics from medium to high range not only reduce the bacterial propagation but also their population up to a considerable extent. Hence, the health of milk- and meat-producing large animals could be improved, which will be cost-effective and less harmful to the animal, human health, and the environment. Moreover, optimized administration of the selected antibiotics would reduce the impact of drug-resistant superbugs. View Full-Text
Keywords: Clostridium perfringens; ciprofloxacin; ampicillin; cefotaxime; optimization; response surface methodology Clostridium perfringens; ciprofloxacin; ampicillin; cefotaxime; optimization; response surface methodology
►▼ Show Figures 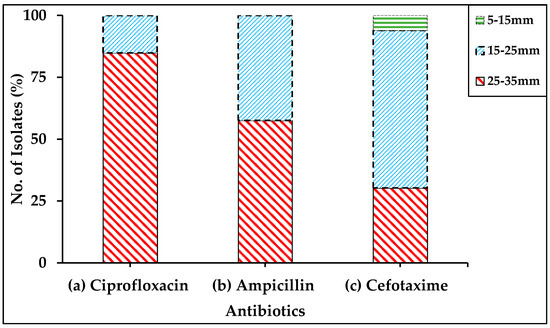