A Review of Applications Using Mixed Materials of Cellulose, Nanocellulose and Carbon Nanotubes
Next Article in Special Issue

Titanium Dioxide Nanoparticles Alter the Cellular Phosphoproteome in A549 Cells

TiO2 nanoparticles (NPs) are one of the most produced NPs worldwide and are used in many consumer products. Their impact on human health, especially through inhalation, has been studied for more than two decades. TiO2 is known for its strong affinity towards phosphates, and consequently interaction with cellular phosphates may be one of the mechanisms driving its toxicity. In the present study, we used a phosphoproteomics approach to document the interaction of TiO2-NP with phosphoproteins from A549 human pulmonary alveolar epithelial cells. Cells were exposed to 21 nm anatase/rutile TiO2-NPs, then their phosphopeptides were extracted and analyzed using shotgun proteomics. By comparing the phosphoprotein content, phosphorylation status and phosphorylation sites of exposed cells with that of control cells, our results show that by affecting the phosphoproteome, TiO2-NPs affect cellular processes such as apoptosis, linked with cell cycle and the DNA damage response, TP53 being central to these pathways. Other pathways including inflammation and molecular transport are also affected. These molecular mechanisms of TiO2-NP toxicity have been reported previously, our study shows for the first time that they may derive from phosphoproteome modulation, which could be one of their upstream regulators. View Full-Text
Keywords: omics; lung; inhalation; nanoparticle; TiO2; proteomics; phosphoproteomics omics; lung; inhalation; nanoparticle; TiO2; proteomics; phosphoproteomics
►▼ Show Figures 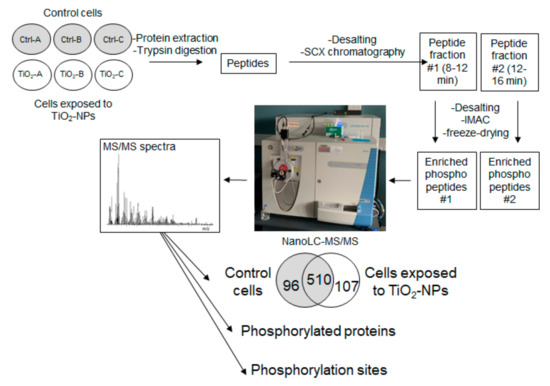