In scenarios such as natural disasters and military strikes, it is common for unmanned aerial vehicles (UAVs) to form groups to execute reconnaissance and surveillance. To ensure the effectiveness of UAV communications, repeated resource acquisition issues and transmission mechanism designs need to be addressed urgently. Since large-scale UAVs will generate high transmission overhead due to the overlapping resource requirements, in this paper, we propose a resource allocation optimization method based on distributed data content in a Flying Ad-hoc network (FANET). The resource allocation problem with the goal of throughput maximization is constructed as a coalition game framework. Firstly, a data transmission mechanism is designed for UAVs to execute information interaction within the coalitions. Secondly, a novel mechanism of coalition selection based on group-buying is investigated for UAV coalitions to acquire data from the central UAV. The data transmission and coalition selection problem are modeled as coalition graph game and coalition formation game, respectively. Through the design of the utility function, we prove that both games have stable solutions. We also prove the convergence of the proposed approach with coalition order and Pareto order. Based on simulation results, coalition order based coalition selection algorithm (CO-CSA) and Pareto order based coalition selection algorithm (PO-CSA) are proposed to explore the stable coalition partition of system model. CO-CSA and PO-CSA can achieve higher data throughput than the contrast onetime coalition selection algorithm (Onetime-CSA) (at least increased by 34.5% and 16.9%, respectively). Besides, although PO-CSA has relatively lower throughput gain, its convergence times is on average 50.9% less than that of CO-CSA, which means that the algorithm choice is scenario-dependent. View Full-Text
Keywords: coalition formation game; coalition graph game; data transmission; Nash equilibrium; resource allocation; unmanned aerial vehicle (UAV) coalition formation game; coalition graph game; data transmission; Nash equilibrium; resource allocation; unmanned aerial vehicle (UAV)
►▼ Show Figures 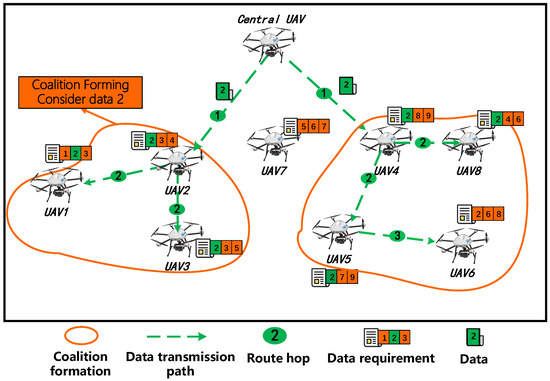