This paper aims to present a new way of understanding and elaborating the current state of reality which has a substantial dependency on technology. An example of such a relatively mature technology is the Internet. The discursive space (DS) is a proposed new cognitive tool, which can be used for this purpose. DS is constructed based on the idea of the discourse and the idea of the configuration space, state space, phase space, and space-time, etc. Discourse is understood as the representation/creation of reality, which means that it can also be understood as a carrier of knowledge. The configuration space, etc., is a tool elaborated in the field of physics for describing complex phenomena. DS is a tool for acquiring knowledge analogous to formal information processes, but is based on another interpretation of the existence of knowledge. This interpretation sees knowledge as a social construction and not as an independent entity, which can be described by rigorous formal procedure. The necessity of such tools comes inter alia from management, particularly from humanistic management, where it can describe the Internet as a dynamic and complex environment for organizations that understand it as a basic unit of the social space of reality. View Full-Text
Keywords: complexity; humanistic management; internet; discourse; knowledge; technology; humanities; sociology complexity; humanistic management; internet; discourse; knowledge; technology; humanities; sociology
►▼ Show Figures 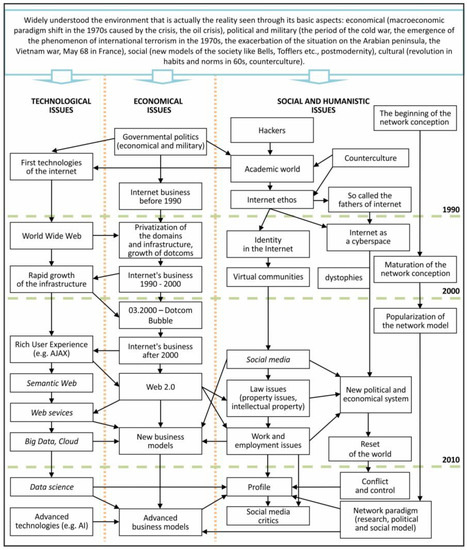 Maciag, R. The Analysis of the Internet Development Based on the Complex Model of the Discursive Space. Information 2018, 9, 7.


Maciag R. The Analysis of the Internet Development Based on the Complex Model of the Discursive Space. Information. 2018; 9(1):7.


Maciag, Rafal. 2018. "The Analysis of the Internet Development Based on the Complex Model of the Discursive Space." Information 9, no. 1: 7.