Salinity is among the main drivers affecting growth and distribution of photosynthetic organisms as Chlamydomonas spp. These species can live in multiple environments, including polar regions, and have been frequently studied for their adaptation to live at different salinity gradients. Upon salinity stress (hypersalinity is the most studied), Chlamydomonas spp. were found to alter their metabolism, reduce biomass production (growth), chlorophyll content, photosynthetic activity, and simultaneously increasing radical oxygen species production as well as lipid and carotenoid contents. This review summarizes the current literature on salt stress related studies on the green algae from the genus Chlamydomonas considering physiological and molecular aspects. The overall picture emerging from the data suggests the existence of common features of the genus in response to salinity stress, as well as some differences peculiar to single Chlamydomonas species. These differences were probably linked to the different morphological characteristics of the studied algae (e.g., with or without cell wall) or different sampling locations and adaptations. On the other hand, molecular data suggest the presence of common reactions, key genes, and metabolic pathways that can be used as biomarkers of salt stress in Chlamydomonas spp., with implications for future physiological and biotechnological studies on microalgae and plants. View Full-Text
Keywords: salinity stress; green algae; Chlamydomonas; Antarctica; extreme environments; omics; green factory salinity stress; green algae; Chlamydomonas; Antarctica; extreme environments; omics; green factory
►▼ Show Figures 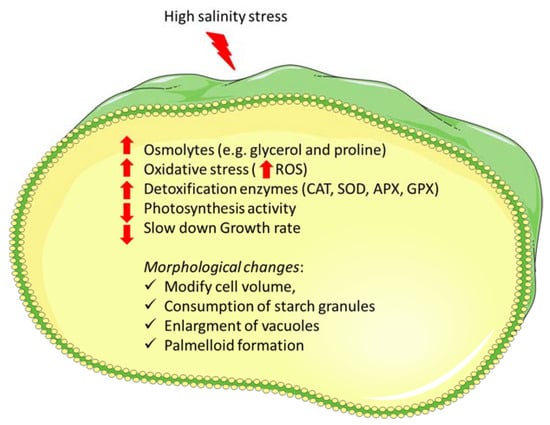