Cofferdams are frequently used to assist in the construction of offshore structures that are built on a natural non-homogeneous anisotropic seabed. In this study, a three-dimensional (3D) integrated numerical model consisting of a wave submodel and seabed submodel was adopted to investigate the wave–structure–seabed interaction. Reynolds-Averaged Navier–Stokes (RANS) equations were employed to simulate the wave-induced fluid motion and Biot’s poroelastic theory was adopted to control the wave-induced seabed response. The present model was validated with available laboratory experimental data and previous analytical results. The hydrodynamic process and seabed response around the dumbbell cofferdam are discussed in detail, with particular attention paid to the influence of the depth functions of the permeability and shear modulus . Numerical results indicate that to avoid the misestimation of the liquefaction depth, a steady-state analysis should be carried out prior to the transient seabed response analysis to first determine the equilibrium state caused by seabed consolidation. The depth function markedly affects the vertical distribution of the pore pressure and the seabed liquefaction around the dumbbell cofferdam. The depth function has a mild effect on the vertical distribution of the pore pressure within a coarse sand seabed, with the influence concentrated in the range defined by 0.1 times the seabed thickness above and below the embedded depth. The depth function has little effect on seabed liquefaction. In addition, the traditional assumption that treats the seabed parameters as constants may result in the overestimation of the seabed liquefaction depth and the liquefaction area around the cofferdam will be miscalculated if consolidation is not considered. Moreover, parametric studies reveal that the shear modulus at the seabed surface has a significant influence on the vertical distribution of the pore pressure. However, the effect of the permeability at the seabed surface on the vertical distribution of the pore pressure is mainly concentrated on the seabed above the embedded depth in front and to the side of the cofferdam. Furthermore, the amplitude of pore pressure decreases as Poisson’s ratio increases. View Full-Text
Keywords: wave–structure–seabed interaction; permeability; shear modulus; wave force; dynamic seabed response; liquefaction wave–structure–seabed interaction; permeability; shear modulus; wave force; dynamic seabed response; liquefaction
►▼ Show Figures 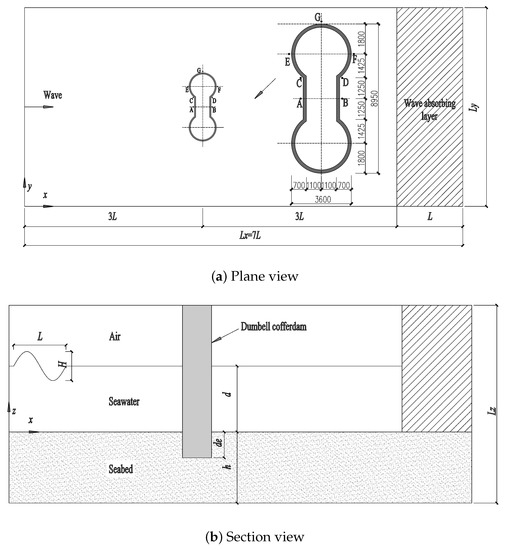