Evaluation of the Nutritive Value and the Fatty Acid, Phenol, Tannin and Terpenoid Contents of Nine Pastures in an Alpine District during the Summer Season

A study was conducted over the summer of 2014 on nine Alpine pastures in the Chisone and Susa Valleys (NW Italy). The aim was to characterize the variation in the chemical composition, gross energy, in vitro true digestibility (IVTD), in vitro neutral detergent fiber digestibility (NDFD), fatty acids (FA), total phenols, total and condensed tannin contents, and terpenoid profile. The dry matter, ash, crude protein, acid detergent fiber, lignin, and gross energy contents of the pastures were found to differ. All the pastures had good IVTD (706–829 g/kg DM) and NDFD (487–694 g/kg NDF) values. The most abundant FAs in all the pastures were α-linolenic (354–519 g/kg of the total FAs), linoleic (75–110 g/kg of the total FAs), and palmitic acid (64–89 g/kg of the total FAs) and they differed significantly among pastures. No significant differences were found in the total phenols, or in the total and condensed tannin contents among pastures. Fifty-eight terpenoids were detected and 4-cyclopentene-1, 3-dione, β-caryophyllene, and eucalyptol were the most abundant. The terpenoids differed both qualitatively and quantitatively among pastures. The results highlight the importance of the great biodiversity of pastures, which provide a balanced distribution of fundamental nutritional elements and bioactive compounds in grasslands. View Full-Text
Keywords: chemical composition; digestibility; nutritive value; grassland; bioactive compound chemical composition; digestibility; nutritive value; grassland; bioactive compound
►▼ Show Figures 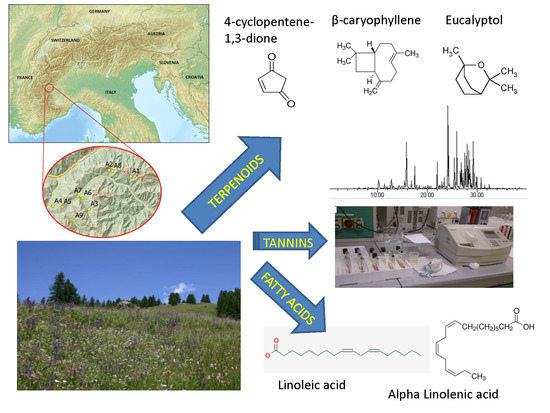