Laxative Use in the Community: A Literature Review

Recent studies using 16S rRNA-based microbiota profiling have demonstrated dysbiosis of gut microbiota in constipated patients. The aim of this study was to investigate the changes in gut microbiota after transanal irrigation (TAI) in patients with spina bifida (SB). A questionnaire on neurogenic bowel disfunction (NBD), Bristol scale, and gut microbiota using 16S rRNA sequencing were completed in 16 SB patients and 10 healthy controls aged 6–17 years. Then, 11 of 16 SB patients with moderate to severe NBD scores received TAI for 3 months. Changes in urine cultures were also examined before and after the TAI treatments. In addition, correlation of gut microbiota and Bristol scale was analyzed. Significantly decreased abundance in Faecalibacterium, Blautia and Roseburia, and significantly increased abundance in Bacteroides and Roseburia were observed in the SB patients compared with controls and after TAI, respectively. The abundance of Roseburia was significantly correlated positively with Bristol scale. Urinary tract infection tended to decrease from 82% to 55% after TAI (p = 0.082) despite persistent fecal incontinence. Butyrate-producing bacteria such as Roseburia play a regulatory role in the intestinal motility and host immune system, suggesting the effects of TAI on gut microbiota. View Full-Text
Keywords: constipation; gut microbiota; spina bifida; transanal irrigation; urinary tract infection constipation; gut microbiota; spina bifida; transanal irrigation; urinary tract infection
►▼ Show Figures 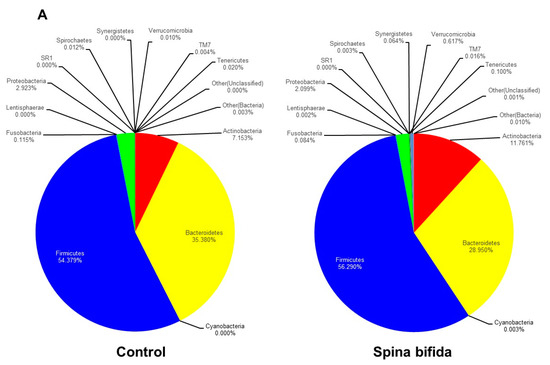