Like other members of the Colchicum genus, C. szovitsii subsp. szovitsii is also of medicinal importance in Turkish traditional medicine. However, its biological properties have not been fully investigated. Herein, we focused on the evaluation of the in vitro antioxidant and enzyme inhibitory effects of flower, root and leaf extracts, obtained using different extraction methods. In addition, a comprehensive (poly)-phenolic and alkaloid profiling of the different extracts was undertaken. In this regard, ultra-high-performance liquid chromatography coupled with quadrupole time-of-flight mass spectrometry (UHPLC-QTOF-MS) allowed us to putatively annotate 195 polyphenols and 87 alkaloids. The most abundant polyphenols were flavonoids (83 compounds), whilst colchicine and 2-demethylcolchicine were some of the most widespread alkaloids in each extract analyzed. However, our findings showed that C. szovitsii leaf extracts were a superior source of both total polyphenols and total alkaloids (being, on average 24.00 and 2.50 mg/g, respectively). Overall, methanolic leaf extracts showed the highest (p < 0.05) ferric reducing antioxidant power (FRAP) reducing power (on average 109.52 mgTE/g) and 2,2-diphenyl-1-picrylhydrazyl (DPPH) radical scavenging (on average 90.98 mgTE/g). Interestingly, each C. szovitsii methanolic extract was more active than the water extracts when considering enzymatic inhibition such as against tyrosinase, glucosidase, and acetylcholinesterase (AChE). Strong correlations (p < 0.01) were also observed between polyphenols/alkaloids and the biological activities determined. Multivariate statistics based on supervised orthogonal projections to latent structures discriminant analysis (OPLS-DA) allowed for the detection of those compounds most affected by the different extraction methods. Therefore, this is the first detailed evidence showing that C. szovitsii subsp. szovitsii might provide beneficial effects against oxidative stress and the associated chronic diseases. Nevertheless, the detailed mechanisms of action need to be further investigated. View Full-Text
Keywords: Colchicum; polyphenols; alkaloids; metabolomics; antioxidants; enzyme inhibition Colchicum; polyphenols; alkaloids; metabolomics; antioxidants; enzyme inhibition
►▼ Show Figures 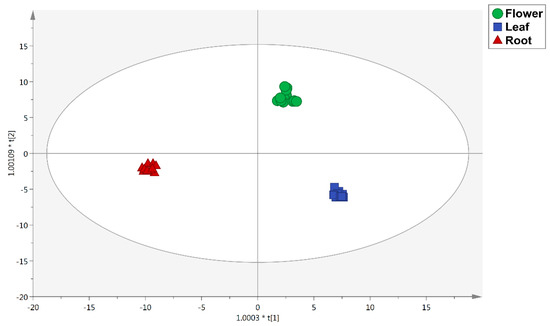