Potential of Smoke-Water and One of Its Active Compounds (karrikinolide, KAR1) on the Phytochemical and Antioxidant Activity of Eucomis autumnalis

Wild edible plants have been used in cooking since ancient times. Recently, their value has improved as a result of the scientific evidence for their nutraceutical properties. Sanguisorba minor Scop. (salad burnet) plants were hydroponically grown and two consecutive cuts took place at 15 (C1) and 30 (C2) days after sowing. An untargeted metabolomics approach was utilized to fingerprint phenolics and other health-related compounds in this species; this approach revealed the different effects of the two cuts on the plant. S. minor showed a different and complex secondary metabolite profile, which was influenced by the cut. In fact, flavonoids increased in leaves obtained from C2, especially flavones. However, other secondary metabolites were downregulated in leaves from C2 compared to those detected in leaves from C1, as evidenced by the combination of the variable important in projections (VIP score > 1.3) and the fold-change (FC > 2). The storage of S. minor leaves for 15 days as fresh-cut products did not induce significant changes in the phenolic content and antioxidant capacity, which indicates that the nutraceutical value was maintained. The only difference evidenced during storage was that leaves obtained from C2 showed a lower constitutive content of nutraceutical compounds than leaves obtained from C1; except for chlorophylls and carotenoids. In conclusion, the cut was the main influence on the modulation of secondary metabolites in leaves, and the effects were independent of storage. View Full-Text
Keywords: metabolomic profiling; functional food; salad burnet; storage; wild edible species metabolomic profiling; functional food; salad burnet; storage; wild edible species
►▼ Show Figures 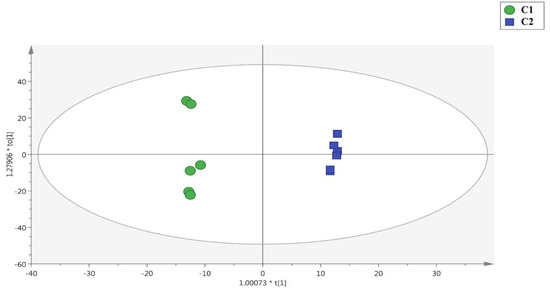