Female reproductive (ovarian) aging is distinctively characterized by a markedly reduced reproductive function due to a remarkable decline in quality and quantity of follicles and oocytes. Selenium (Se) has been implicated in playing many important biological roles in male fertility and reproduction; however, its potential roles in female reproduction, particularly in aging subjects, remain poorly elucidated. Therefore, in the current study we used a murine model of female reproductive aging and elucidated how different Se-levels might affect the reproductive efficiency in aging females. Our results showed that at the end of an 8-week dietary trial, whole-blood Se concentration and blood total antioxidant capacity (TAOC) were significantly reduced in Se-deficient (0.08 mg Se/kg; Se-D) mice, whereas both of these biomarkers were significantly higher in inorganic (0.33 mg/kg; ISe-S) and organic (0.33 mg/kg; OSe-S) Se-supplemented groups. Similarly, compared to the Se-D group, Se supplementation significantly ameliorated the maintenance of follicles and reduced the rate of apoptosis in ovaries. Meanwhile, the rate of in vitro-produced embryos resulting from germinal vesicle (GV) oocytes was also significantly improved in Se-supplemented (ISe-S and OSe-S) groups compared to the Se-D mice, in which none of the embryos developed to the hatched blastocyst stage. RT-qPCR results revealed that mRNA expression of Gpx1, Gpx3, Gpx4, Selenof, p21, and Bcl-2 genes in ovaries of aging mice was differentially modulated by dietary Se levels. A considerably higher mRNA expression of Gpx1, Gpx3, Gpx4, and Selenof was observed in Se-supplemented groups compared to the Se-D group. Similarly, mRNA expression of Bcl-2 and p21 was significantly lower in Se-supplemented groups. Immunohistochemical assay also revealed a significantly higher expression of GPX4 in Se-supplemented mice. Our results reasonably indicate that Se deficiency (or marginal levels) can negatively impact the fertility and reproduction in females, particularly those of an advancing age, and that the Se supplementation (inorganic and organic) can substantiate ovarian function and overall reproductive efficiency in aging females. View Full-Text
Keywords: selenium; ovarian aging; Gpx1; Gpx3; GPX4; Selenof; selenoprotein; follicle development; embryo; apoptosis selenium; ovarian aging; Gpx1; Gpx3; GPX4; Selenof; selenoprotein; follicle development; embryo; apoptosis
►▼ Show Figures 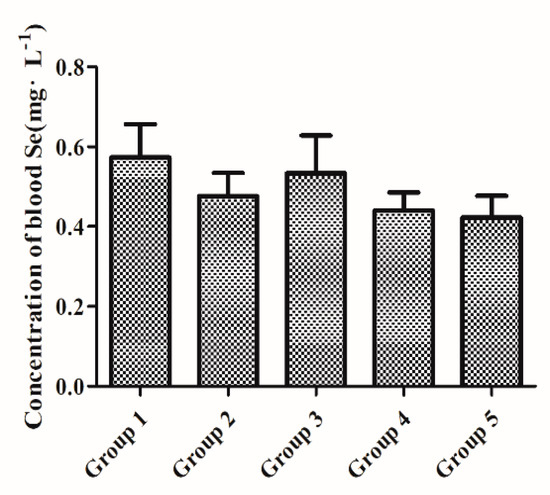