With the increasing scale of multi-energy microgrids (MGs) and complicated operation modes, the coordinated operation of microgrids and the distribution network (DN) has posed great challenges. In this paper, a bi-level optimal coordinated dispatch framework of the DN and multi-energy MGs based on CCHP (combined cooling, heating, and power) is proposed. The first level studies the optimal operation of the DN with power interaction on tie lines between MGs considering the coupling relationship and constraints of the equipment and network. The network reconfiguration with limited control actions is considered to increase the flexibility of the topology and further improve the working state. For the second level, MGs receive orders from the DN and determine the optimal strategies of multi-energy devices to achieve optimized operation under the condition of satisfying the different types of load and requirement for the DN. To solve the optimal dispatch problem of both the DN and the multi-energy MGs considering the DN reconfiguration, a method combining particle swarm optimization algorithm (PSO) with mixed-integer linear programming (MILP) is proposed. Cases studied in an IEEE33-node DN with renewable power sources and grid-connected MGs validate that the proposed method is very effective in reducing the power loss and voltage offset of the DN while ensuring the benefits of the MGs. View Full-Text
Keywords: microgrids; combined cooling; heating and power; distribution network reconfiguration; coordinated dispatch; limited control actions microgrids; combined cooling; heating and power; distribution network reconfiguration; coordinated dispatch; limited control actions
►▼ Show Figures 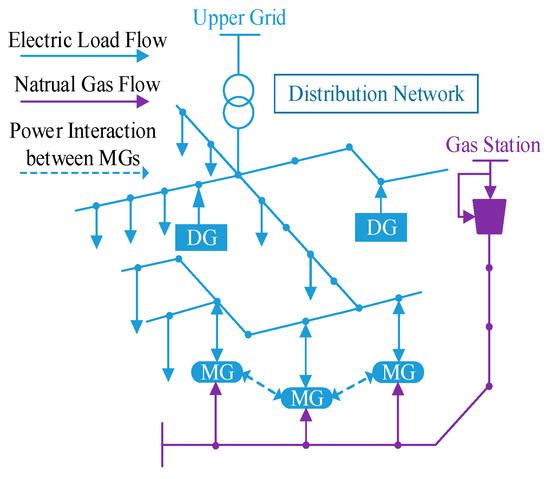