A novel technique for the in situ removal of mineral hydrocarbons from aged brownfields is described. The approach uses emulsions of plant oil (5–10%, rapeseed) in water, which were found to extract 50–85% of mineral hydrocarbons in one leaching step from the non-saturated zone. The emulsion was allowed to travel though the ground and was pumped off from the groundwater level. Approximately 15–50% of the plant oil stayed in the soil. By flushing the area with water afterwards, that amount can be reduced to 10–30%, and in some cases to <5%. This process is only suitable for sand, not for clay. It can be a good preparation for subsequent enzymatic cleavage and microbiological degradation, as part of a multi-stage in situ treatment process. Additionally, plant oil that infiltrated into the saturated zone was used to flush mineral hydrocarbons, which could be pumped off from the groundwater level. It was further tested whether the separation of mineral oil/plant oil and water can be performed by oil-absorbing, reusable non-wovens. Residual concentrations of <2% of water in oil, and 0.3–0.7 mg/L of oil in water were found. In this work, lab trials led to field trials, where more than 500 m3 of water were sent over a pilot installation for oil/water separation using non-wovens. A slightly better separation performance than by oil separators was observed. This process has the potential to be combined with a regular oil separator to allow water purification to a level at which it can be reintroduced into the ground. The technique was tested on a brownfield in Lower Austria, a former refinery site abandoned approx. 80 years ago with a peak hydrocarbon contamination of 40,000 mg/kg of dry soil and free-floating mineral oil on the groundwater level. Since in situ techniques can be more environmentally benign and less costly than traditional remediation approaches, this novel approach holds an interesting potential, which could be proven at a technology readiness level (TRL) of 5. View Full-Text
Keywords: brownfield; mineral oil; remediation; in-situ; fleece; land recycling; cleanup; decontamination brownfield; mineral oil; remediation; in-situ; fleece; land recycling; cleanup; decontamination
►▼ Show Figures 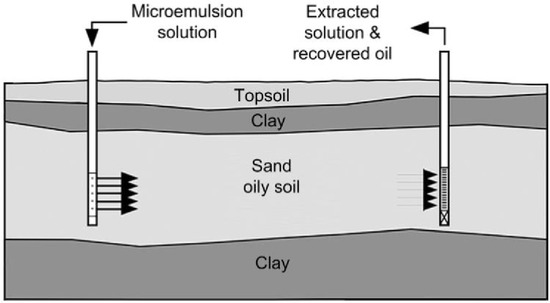