Revisiting the Most Destructive Earthquake Sequence in the Recent History of Greece: Environmental Effects Induced by the 9, 11 and 12 August 1953 Ionian Sea Earthquakes

The August 1953 seismic sequence comprised the most destructive events in the recent history of Greece. The mainshock on 12 August, and its foreshocks on 9 and 11 August, devastated the southern Ionian Islands. The existing literature emphasized the destructive effects of the earthquakes on buildings, as well as to the emergency response and recovery actions. This resulted in a large gap in capturing the full picture of the earthquake’s environmental effects. The present study aims to fill this gap by reconstructing the most complete picture possible of the primary and secondary effects on the environment of the southern Ionian Islands by the August 1953 earthquakes. This reconstruction is based on all available sources, comprising not only the existing scientific literature, but especially sources that have not been considered to date, including newspapers of local and national circulation. In total, 120 cases of the earthquake’s environmental effects were identified, comprised of 33 cases of primary and 87 cases of secondary effects. In descending order of occurrence, slope failures, co-seismic uplift, hydrological anomalies, ground cracks, tsunami, liquefaction, dust clouds, hydrocarbon-related phenomena, jumping stones and vegetation effects were distributed mainly in Cephalonia Island and secondarily in the Ithaki and Zakythos Islands. The primary effects were mainly detected in eastern Cephalonia, which presented uplift of up to 70 cm, while the majority of the secondary effects were triggered in specific zones with characteristics that made them susceptible to the occurrence of earthquake-related hazards. View Full-Text
Keywords: Ionian Sea; Cephalonia; earthquake-induced environmental effects; coseismic uplift; ESI-07 scale; landslide susceptibility Ionian Sea; Cephalonia; earthquake-induced environmental effects; coseismic uplift; ESI-07 scale; landslide susceptibility
►▼ Show Figures 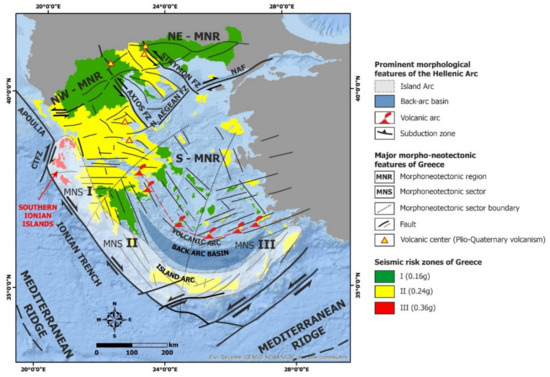 Spyridon Mavroulis
Dr. Spyridon Mavroulis is a Geologist with an MSc in Prevention and Management of Natural Hazards and a PhD in Geology and Earth Sciences. His research focuses mainly on hazard and risk assessment of earthquakes and their geodynamic phenomena. He has participated in more than 20 research projects on the integrated management of geoenvironmental impact from natural hazards and related disasters. He has published several articles on post-disaster assessment and mapping of the impact of natural disasters in peer reviewed journals and conferences. He has participated in more than 20 scientific missions in disaster affected areas in Greece and worldwide.

Efthymis Lekkas
Dr. Efthymios Lekkas is a Professor of Dynamic, Tectonic, Applied Geology and Natural Disasters Management in the National and Kapodistrian University of Athens (NKUA), President of the Department of Geology and Geoenvironment (NKUA) and President of the Earthquake Planning and Protection Organization of Greece (EPPO). He has published books on natural and technological hazards and disasters and more than 300 scientific publications in peer-reviewed journals and national and international congresses with subjects including dynamic, tectonic, and applied geology, seismotectonics, earthquake engineering and management of natural and technological disasters. He has participated in and/or coordinated operational missions for major disasters management during the last 30 years in Greece and worldwide.
Zoom | Orient | As Lines | As Sticks | As Cartoon | As Surface | Previous Scene | Next Scene
We use cookies on our website to ensure you get the best experience. Read more about our cookies here.
Accept
We have just recently launched a new version of our website. Help us to further improve by taking part in this short 5 minute survey here. here.
Never show this again