The Effect of Site-Specific Design Spectrum on Earthquake-Building Parameters: A Case Study from the Marmara Region (NW Turkey)

The Marmara Region (NW Turkey) has experienced significant earthquakes (M > 7.0) to date. A destructive earthquake is also expected in the region. To determine the effect of the specific design spectrum, eleven provinces located in the region were chosen according to the Turkey Earthquake Building Code updated in 2019. Additionally, the differences between the previous and updated regulations of the country were investigated. Peak Ground Acceleration (PGA) and Peak Ground Velocity (PGV) were obtained for each province by using earthquake ground motion levels with 2%, 10%, 50%, and 68% probability of exceedance in 50-year periods. The PGA values in the region range from 0.16 to 0.7 g for earthquakes with a return period of 475 years. For each province, a sample of a reinforced-concrete building having two different numbers of stories with the same ground and structural characteristics was chosen. Static adaptive pushover analyses were performed for the sample reinforced-concrete building using each province’s design spectrum. The variations in the earthquake and structural parameters were investigated according to different geographical locations. It was determined that the site-specific design spectrum significantly influences target displacements for performance-based assessments of buildings due to seismicity characteristics of the studied geographic location. View Full-Text
Keywords: site-specific spectrum; Marmara Region; seismic hazard analysis; adaptive pushover site-specific spectrum; Marmara Region; seismic hazard analysis; adaptive pushover
►▼ Show Figures 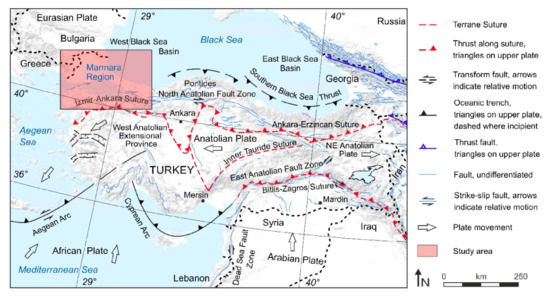