Various studies have been conducted on the aerodynamic characteristics of nonspinning and spinning soccer balls. However, the vortex structures in the wake of the balls are almost unknown. One of the main computational fluid dynamics methods used for the analysis of vortex structures is the lattice Boltzmann method as it facilitates high-precision analysis. Studies to elucidate the dominant vortex structure are important because curled shots and passes involving spinning balls are frequently used in actual soccer games. In this study, we identify the large-scale dominant vortex structure of a soccer ball and investigate the stability of the structure using the lattice Boltzmann method, wind tunnel tests, and free-flight experiments. One of the dominant vortex structures in the wake of both nonspinning and spinning balls is a large-scale counter-rotating vortex pair. The side force acting on a spinning ball stabilizes when the fluctuation of the separation points of the ball is suppressed by the rotation of the ball. Thus, although a spinning soccer ball is deflected by the Magnus effect, its trajectory is regular and stable, suggesting that a spinning ball can be aimed accurately at the outset of its course. View Full-Text
Keywords: aerodynamics; soccer ball; vortex; drag; lift aerodynamics; soccer ball; vortex; drag; lift
►▼ Show Figures 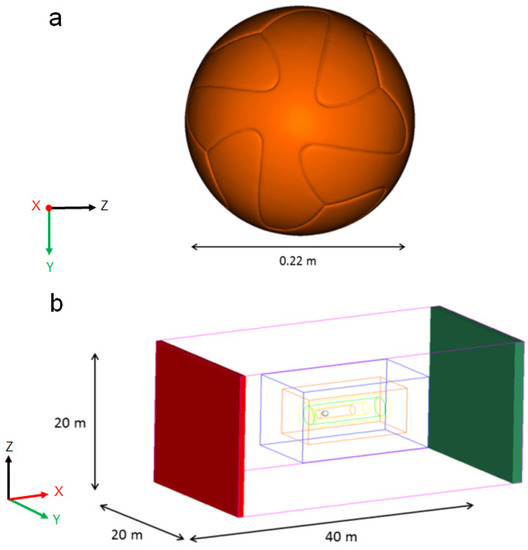