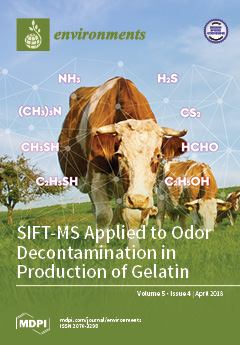 Cover Story (view full-size image): Animal by-products can be converted into gelatin. The process of conversion of animal hides into gelatin is often accompanied by the production of odors. A SIFT-MS direct mass spectrometric technique is used to appraise an odor neutralization technology that utilizes UV photolysis. View this paper.
Previous Issue
Volume 5, March
Next Issue
Volume 5, May
We use cookies on our website to ensure you get the best experience. Read more about our cookies here.
Accept
We have just recently launched a new version of our website. Help us to further improve by taking part in this short 5 minute survey here. here.
Never show this again