The Role of Temperature in the Safety Case for High-Level Radioactive Waste Disposal: A Comparison of Design Concepts

The final disposal of high-level nuclear waste in many countries is preferred to be in deep geological repositories. Compacted bentonites are proposed for use as the buffer surrounding the waste canisters which may be subjected to both thermal and hydraulic loadings. A significant increase in the temperature is anticipated within the buffer, particularly during the early phase of the repository lifetime. In this study, several non-isothermal and non-isothermal hydraulic tests were carried on compacted MX80 bentonite. Compacted bentonite specimens (water content = 15.2%, dry density = 1.65 Mg/m3) were subjected to a temperature of either 85 or 150 °C at one end, whereas the temperature at the opposite end was maintained at 25 °C. During the non-isothermal hydraulic tests, water was supplied from the opposite end of the heat source. The temperature and relative humidity were monitored along predetermined depths of the specimens. The profiles of water content, dry density, and degree of saturation were established after termination of the tests. The test results showed that thermal gradients caused redistribution of the water content, whereas thermo-hydraulic gradients caused both redistribution and an increase in the water content within compacted bentonites, both leading to development of axial stress of various magnitudes. The applied water injection pressures (5 and 600 kPa) and temperature gradients appeared to have very minimal impact on the magnitude of axial stress developed. The thickness of thermal insulation layer surrounding the testing devices was found to influence the temperature and relative humidity profiles thereby impacting the redistribution of water content within compacted bentonites. Under the influence of both the applied thermal and thermo-hydraulic gradients, the dry density of the bentonite specimens increased near the heat source, whereas it decreased at the opposite end. The test results emphasized the influence of elevated temperatures (up to 150 °C) on the thermo-hydro-mechanical response of compacted bentonites in the nuclear waste repository settings. View Full-Text
Keywords: bentonite; radioactive waste disposal; temperature; hydration; thermal loading; hydraulic loading; clay response; unsaturated soil; stress; laboratory tests bentonite; radioactive waste disposal; temperature; hydration; thermal loading; hydraulic loading; clay response; unsaturated soil; stress; laboratory tests
►▼ Show Figures 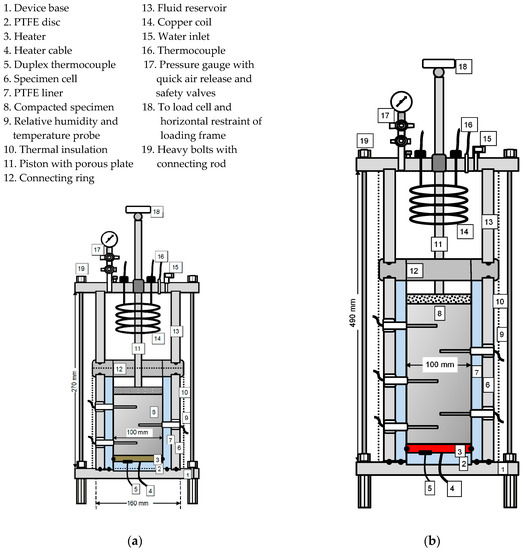