Tectono-Sedimentary Evolution of the Madrid Basin (Spain) during the Late Miocene: Data from Paleokarst Profiles in Diagenetically-Complex Continental Carbonates

An intra-Vallesian (Upper Miocene) paleokarst developed at the top of the Intermediate Miocene Unit in the continental intracratonic Madrid Basin is recognized. This paleokarst is an early shallow, tabular-shaped karst that shows a marked control by the depositional facies pattern and lithologies. By integrating morphological, petrological, and geochemical data, three hydrogeological zones were established throughout the paleokarstic profiles: (i) a paleo-vadose zone, characterized by vertically elongated caves and vadose cementation; (ii) a 3–7 m thick paleo-epiphreatic zone (paleo-water table fringe), with development of stratiform breccia bodies, the superimposition of both vadose and phreatic features, and the lowest Fe and Mn contents in host-rock carbonates; and (iii) a paleo-phreatic zone characterized by an increase in δ13C values and the predominance of phreatic cementation. The paleogeographic reconstruction for the intra-Vallesian paleokarst using profiles revealed relative topographic highs to the north and topographic lows to the south, drawing the paleokarst landscape. Immediately overlaying the paleokarst surface are fluvio-lacustrine facies belonging to the Miocene Upper Unit (Late Vallesian to Late Turolian). Their lowermost deposits consist of fluvial terrigenous facies deposited by approximately N–S fluvial streams, and pass upward into fluvio-lacustrine fresh-water limestones. This paleokarstic surface represents a major change in the evolution of sedimentary patterns of basin, from endorheic to exorheic conditions, as the result of a change from compressive to extensional conditions in the tectonic regime. View Full-Text
Keywords: paleokarst; dedolomite; meteoric diagenesis; stable isotopes; endorheic-exorheic transition; Miocene; Cenozoic Madrid Basin paleokarst; dedolomite; meteoric diagenesis; stable isotopes; endorheic-exorheic transition; Miocene; Cenozoic Madrid Basin
►▼ Show Figures 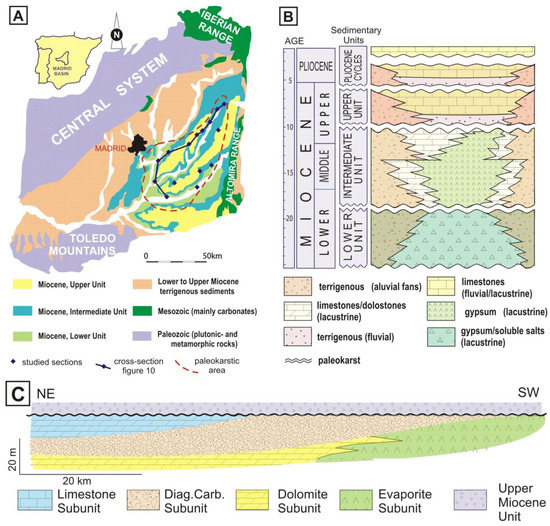