Are Tail and Ear Movements Indicators of Emotions in Tail-Docked Pigs in Response to Environmental Enrichment?
Previous Article in Special Issue

Single Nucleotide Polymorphisms in SLC5A1, CCNA1, and ABCC1 and the Association with Litter Size in Small-Tail Han Sheep

Keratin-associated proteins (KAPs) are key constituents of wool and hair fibers. In this study, an ovine KAP gene encoding a HGT-KAP protein was identified. The gene was different from all of the HGT-KAP genes identified in sheep, but was closely related to the human KAP21-1 gene, suggesting that it represented the unidentified ovine KRTAP21-1. Four variants (named A to D) of ovine KRTAP21-1 were found in 360 Merino × Southdown-cross lambs from four sire lines. Three sequence variations were detected among these variants. Two of the sequence variations were located upstream of the coding region and the remaining one was a synonymous variation in the coding sequence. Six genotypes were found in the Merino-cross lambs, with only two of the genotypes (AA and AC) occurring at a frequency of over 5%. Wool from sheep of genotype AA had a higher yield than that from AC sheep (p = 0.014), but tended to have a lower greasy fleece weight (GFW) than that of genotype AC (P = 0.078). This suggests that variation in KRTAP21-1 affects wool yield and the gene may have potential for use as a genetic maker for improving wool yield. View Full-Text
Keywords: KAP21-1 gene (KRTAP21-1); variation; wool yield; sheep KAP21-1 gene (KRTAP21-1); variation; wool yield; sheep
►▼ Show Figures 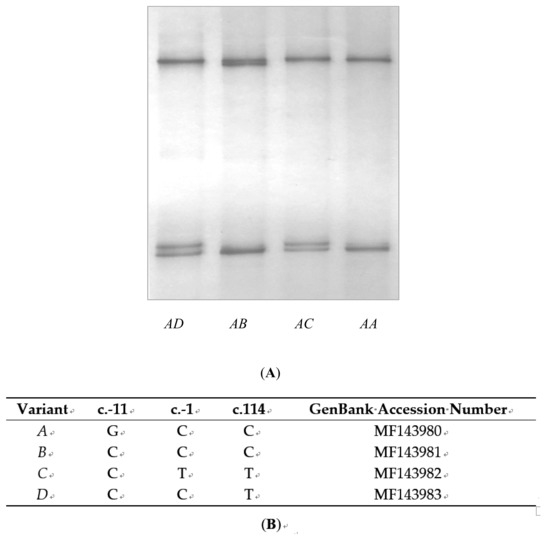