Single and Combined Effects of Clostridium butyricum and Saccharomyces cerevisiae on Growth Indices, Intestinal Health, and Immunity of Broilers
Next Article in Special Issue

Animal welfare has been of increasing interest to consumers and producers of animal products in Europe. Issues during transport affect both the wellbeing and the productivity of livestock. This study was conducted to analyze two practice-oriented transport variants of organically mixed-held white and brown pullets. No significant difference could be found between the transport variants. Instead, we discovered clear differences between the two genetic pullet lines.

The welfare of two genetic lines of organic layer hen pullets—H&N Super Nick (HNS) and H&N Brown Nick (HNB)—was compared during two commercial transport variants of 15 flocks of mixed-reared birds. Birds were either transported overnight (with a break in travel), or were transported direct to the layer farm (without a break in travel). Samples of feces were collected non-invasively from 25 birds of each genetic line per flock for each transport variant before transportation to evaluate baseline values of glucocorticoid metabolites, and at 0 h, 3 h, 6 h, 10 h, 24 h, 34 h, 48 h, 58 h, and 72 h after the end of transportation, to measure transportation and translocation stress. We assessed the fear toward humans with the touch test before transportation, and we checked the birds’ body condition by scoring the plumage condition and the occurrence of injuries. Body weight before and weight loss after transportation were determined, and ambient temperature was measured before, during, and after transportation. Stress investigations showed no significant differences between the transport variants (effect: −0.208; 95% confidence interval (CI): (−0.567; 0.163)). Instead, we discovered differences between the pullet lines (effect: −0.286; 95% CI: (−0.334; 0.238)). Weight loss was different between the transport variants (2.1 percentage points; 95% CI: (−2.6; −1.5)) and between the genetic lines, as HNB lost significantly less weight than HNS (0.5 percentage points; 95% CI: (0.3; 0.7)). View Full-Text
Keywords: animal welfare; transport; pullet; stress parameter; corticosterone metabolite animal welfare; transport; pullet; stress parameter; corticosterone metabolite
►▼ Show Figures 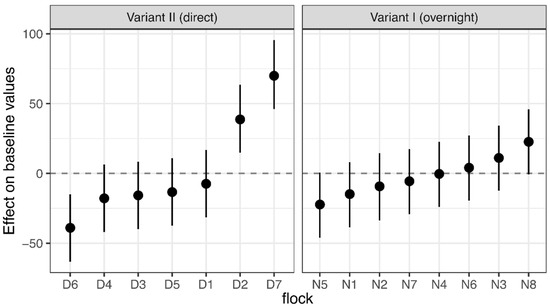