Cattle comprise a species of a domestic animal that is primarily bred for milk production. The birth of a calf is the initiator for the lactation period and the sex of the calf can affect milk yield. Additionally, a calf from a new pregnancy can affect the lactation from the previous calving, since the mother gets pregnant and remains pregnant during most of the lactation, usually at lactation peak. Therefore, the aim of this paper was to further investigate the possibilities of sexually biased milk production of Holstein and Holstein crossbreed cows using data from the Republic of Serbia. We also wanted to test the Trivers–Willard (TW) hypothesis that natural selection favors unequal parental investment between daughters and sons under certain maternal conditions. At the same time, this hypothesis assumes that mothers in good health and condition invest more in sons, while mothers in a poor condition invest more in daughters. The obtained results deviate from the view of the TW hypothesis because it was found that milk and fat yields in the first two lactations were the highest in cows that had a female calf and were then pregnant with a second female calf while the lactation from the previous calving was still in progress. We were the first in the world to investigate the effect of the sex of calves at first and second calving on milk yield and fat yield in the first and second standard lactation, depending on milk production levels on farms.

In order to examine the biased milk production depending on the sex of calves, data on calving and milk yield characteristics of 15,181 Holstein type cows in PK Belgrade, Serbia were analyzed. A total of 30,362 lactations that were realized in the period from 1985 to 2017 were analyzed. Data were prepared and analyzed using the SAS software package (SAS Institute Inc. Software License 9.3, 2012). The expression and variability of investigated traits were determined using the PROC MEANS procedure, while the effect of individual factors on milk yield traits was analyzed using the PROC GLM procedure. Obtained results deviate from the views of the Trivers–Willard (TW) hypothesis. The results indicate that mothers invest more in female offspring by producing a higher milk and fat yield in the first and second lactation compared to male offspring. This is especially emphasized under better environmental conditions. The highest milk yield (7788 kg) and fat yield (271 kg) in the second lactation were achieved in the combination with two consecutive female calves in the group of higher-than-average milk production farms, and lowest in the combination of two consecutive male calves (6783 kg for the MY and 243 kg for the FY), respectively. View Full-Text
Keywords: Trivers–Willard hypothesis; sex; calf; dairy cattle; milk traits; maternal investment Trivers–Willard hypothesis; sex; calf; dairy cattle; milk traits; maternal investment
►▼ Show Figures 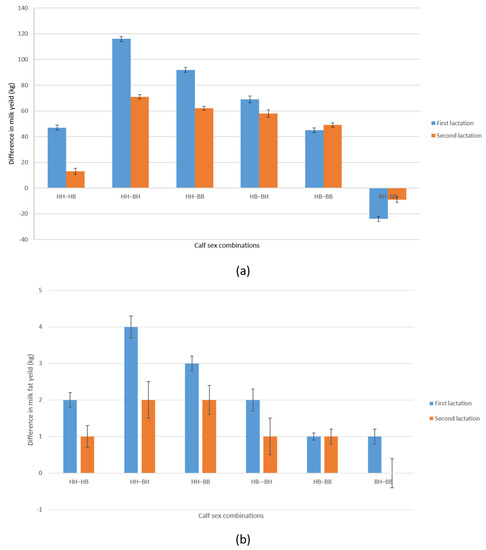