The Effect of Dietary Helianthus tuberosus L. on the Populations of Pig Faecal Bacteria and the Prevalence of Skatole

Sheep are regularly exported from Australia to the Middle East, which is one of the world’s longest sea journeys. There is a particular risk to animal welfare in voyages departing Australia in the Southern Hemisphere winter and arriving in the Persian Gulf in the Middle East after about 15 days, into the Northern Hemisphere summer, because of the rapid transition from cold to hot temperatures. The threshold temperature when welfare problems occur is not well understood. We utilized data, including temperature and the number of sheep that died, collected on 14 shipments of sheep, travelling from Australia to the Middle East in the May to December period, between 2016 and 2018. Our modelling of the data suggested that sheep would experience heat stress in 50% of voyages between July and September offloading sheep at two of four Persian Gulf ports. Furthermore, when sheep were taken off the ship at Doha, the hottest port, first, the number dying on the ship increased. The results confirm the beneficial impact on animal welfare of restricting any sailing with a cargo of sheep from Australia to the Middle East in the Southern Hemisphere winter.

One of the world’s longest sea transport routes of live sheep for slaughter is from Australia to the Middle East. Heat stress is a major cause of mortality in shipments of sheep, particularly in sheep leaving Australia in the Southern Hemisphere winter to arrive in the Middle Eastern summer. Temperature and mortality data were utilized and recorded from fourteen voyages from Australia to the Middle East in May to December, 2016–2018, with the aim of determining when the welfare of the sheep began to be affected by elevated temperatures. Increases in heat stress were recorded at temperatures normally experienced in 50% of voyages between July and September offloading sheep at two of the four Persian Gulf ports, Doha and Dubai; however, small increases in recorded heat stress were not sufficient to increase mortality. Temperatures increased most rapidly when sheep were offloaded initially at Doha first, followed by other Gulf ports, and this resulted in higher mortality than when sheep were offloaded at other ports first. These results confirm benefits of restricting voyages leaving Australia in the Southern Hemisphere winter and suggest that shipments offloading at multiple ports should not offload at the hottest port, Doha, first. View Full-Text
Keywords: heat stress; live export; mortality; sheep; temperature heat stress; live export; mortality; sheep; temperature
►▼ Show Figures 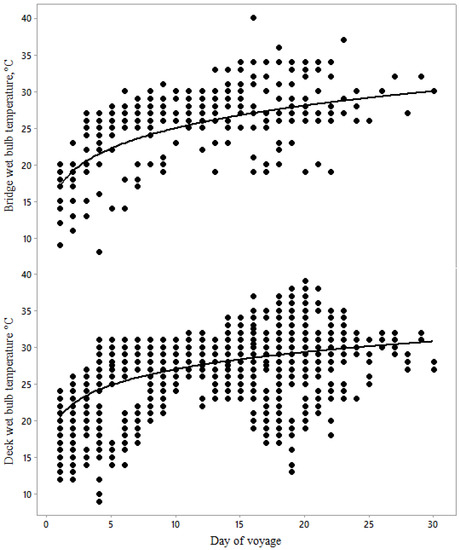