Effects of the Community Cats Program on Population Control, Migration and Welfare Status of Free-Roaming Cats in Tokyo, Japan

The community cats program (CCP), which includes trap–neuter–return activities, has been promoted in Japan to reduce the population of free-roaming cats without harmful effects on their welfare. To ascertain the effects of the CCP, a two-year survey of free-roaming cats was conducted in an area with CCP and another area without CCP in urban Tokyo, Japan. The estimated number of cats was lower in the CCP area than the non-CCP area, but there was no difference in the rate of decline in cat populations between areas. More cats disappeared (moved out, died, or entered homes) than appeared (moved in or born) in both areas in the second year and more males tended to move into the CCP area. There was no difference in the behavior of cats between areas and among seasons. The proportion of cats with poor health was lower in the CCP area than the non-CCP area. These results suggest that the CCP may improve the welfare of free-roaming cats. As the effect of CCP was restrictive in reducing free-roaming cats, the further promotion of neutering of cats may be necessary. 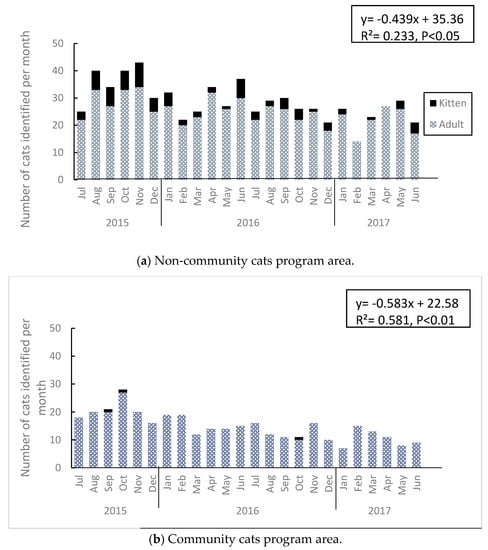