Social Referencing in the Domestic Horse

Testosterone is the main reproductive hormone in male vertebrates. Conventional methods to assess testosterone rely on invasive blood sampling procedures, which can induce pain and distress to the animals. Here we successfully validated a non-invasive method to determine testosterone levels by assessing testosterone metabolites (TMs) in excreta of mice. We investigated the effects of sex and daytime on the metabolism and the excretion of TMs and validated the applied EIA to measure TMs. Further, we assessed diurnal fluctuations in TM excretions in both sexes and across strains. We found that males excreted more radiolabeled TMs via their feces compared to females. TM excretion patterns did not differ between sexes but TM excretion occurred faster in urinary than fecal samples. Animals excreted TM faster during the night than during the day. Daytime had no effect on the formed TMs; however, males and females formed different TMs. As expected, males showed higher fecal TM levels than females. Males also showed diurnal fluctuations in their TM levels but we found no differences between mouse strains. Our non-invasive method to assess fecal TMs can be widely used and will benefit various research disciplines.

Testosterone is the main reproductive hormone in male vertebrates and conventional methods to measure testosterone rely on invasive blood sampling procedures. Here, we aimed to establish a non-invasive alternative by assessing testosterone metabolites (TMs) in fecal and urinary samples in mice. We performed a radiometabolism study to determine the effects of daytime and sex on the metabolism and excretion pattern of radiolabeled TMs. We performed physiological and biological validations of the applied EIA to measure TMs and assessed diurnal fluctuations in TM excretions in male and female mice and across strains. We found that males excreted significantly more radiolabeled TMs via the feces (59%) compared to females (49.5%). TM excretion patterns differed significantly between urinary and fecal samples and were affected by the daytime of ³H-testosterone injection. Overall, TM excretion occurred faster in urinary than fecal samples. Peak excretion of fecal TMs occurred after 8 h when animals received the 3H-testosterone in the morning, or after 4 h when they received the 3H-testosterone injection in the evening. Daytime had no effect on the formed TMs; however, males and females formed different types of TMs. As expected, males showed higher fecal TM levels than females. Males also showed diurnal fluctuations in their TM levels but we found no differences in the TM levels of C57BL/6J and B6D2F1 hybrid males. Finally, we successfully validated our applied EIA (measuring 17β-hydroxyandrostane) by showing that hCG (human chorionic gonadotropin) administration increased TM levels, whereas castration reduced them. In conclusion, our EIA proved suitable for measuring fecal TMs in mice. Our non-invasive method to assess fecal TMs can be widely used in various research disciplines like animal behavior, reproduction, animal welfare, ecology, conservation, and biomedicine. View Full-Text
Keywords: testosterone; mice; androgens; non-invasive; feces testosterone; mice; androgens; non-invasive; feces
►▼ Show Figures 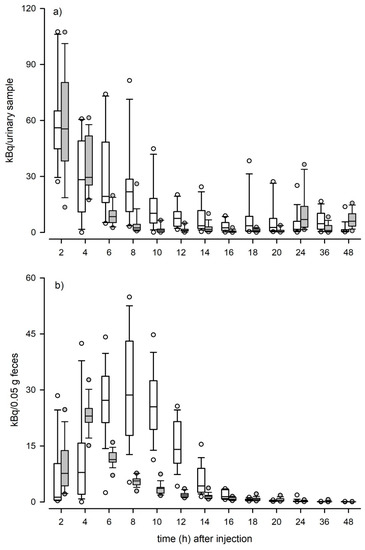